All change for Guild council at AGM 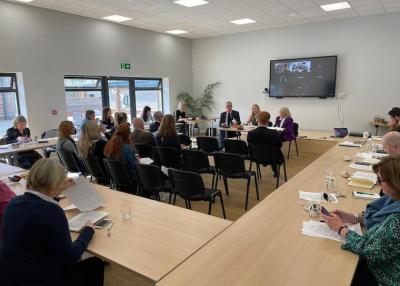 He was Deputy Chairman of the Guild, produces the annual yearbook, and has previously held the role of communications secretary.

Paying tribute to the outgoing Chairwoman Olivia Cooper, Johann said: “Olivia has done a tremendous job over the past two years, especially during the pandemic as it has been a very difficult time.”

With a total of seven years serving as a director and, for the past two years serving as Chairwoman, Olivia has decided it’s time to move to an advisory role. Read her outgoing 2022 report here.

Johann set out his vision for his term by adding: “I would like to see more in-person training events where they are needed and more social events bringing people together.

“In some ways we are all competitors, but we all sit the same side of the fence and have the best interests of the industry at heart.”

Baroness Ann Mallalieu QC, a lawyer who lives on a family farm in Somerset, succeeded Baroness Rosie Boycott as the Guild’s new President.

She is a Labour peer in the House of Lords and serves on the Land Use in England and Rural Economy committees, and lists agriculture, animals, food, and rural affairs among her policy interests.

Baroness Mallalieu is also President of the Countryside Alliance.

On accepting the role, she said: “There is pretty good turmoil in agriculture giving ample opportunities of stories for journalists.

“There is limited land, lots of demand and lots of conflict. I am very honoured to be asked to take on this role and look forward to meeting all of you personally in the next year.”

PR consultant Liz Snaith has been a director on the council for the past five years and so Guild rules require her to stand down for at least one year. Hannah Crawford has resigned now that she is living and working in Canada, and Catherine Linch, MD of Pinstone, is stepping down in her role as an advisor.

Nominations were received to fill the three director vacancies prior to the event. These were Rosie Hopkins, Account Director for Pinstone, Andrew Newbold, Director of FarmSmart Events and FarmSmart Publishing, and Caroline Stocks; a freelance journalist. All were proposed, seconded and duly elected.

The meeting was held at a new venue to the Guild; Bragborough Hall Business Centre, on Thursday 24 March.

Here there was also the chance to hear a summary of the BGAJ Treasurer’s Report and the Charitable Trust Report by Clive Rainbird.

To find out more about the day’s events please follow the link to the meeting minutes here.