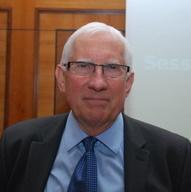 Barry Wilson, a long-time member of the Guild, died aged 83 on Christmas Day at his home in France after a lengthy career as a journalist covering the UK and global dairy industry.

Born in Hull, East Yorkshire in 1938, Barry moved as a child to Tasmania where he completed his education and worked as an agricultural journalist before moving to the Department of Trade in Canberra in the late 1960s.

Restless and keen to get back into journalism, he returned to England in 1970, and was struck by the contrast between the aggressive approach to journalism in Australia, where agriculture was taken seriously, and what seemed to him the passive and non-confrontational approach taken in the UK.

The British farming press seemed to be primarily concerned with banging the drum for farming, he felt; digging up scandal and controversy seemed like disloyalty.

That changed with the launch in the late 1970s of Big Farm Weekly, whose first editor, the late Derek Fraser, recruited Barry to the news desk with clear instructions to “dig out the dirt”.

“This is where his fascination with the dairy industry began,” says Catherine Paice, his long-time friend, collaborator and fellow Guild member.

“His biggest scoops, he said, were the scandalous downfall of Anthony Rosen’s Fountain Farming dairy empire, and his discovery that Milk Marketing Board chairman Steve Roberts was trying to raise cash from farmers via an opaque ‘rolling fund’. Barry made enough of a name for himself at Big Farm Weekly that BBC Farming on Sunday employed him as a presenter.”

Barry also worked for Anglia TV but was itching to get back to ‘real’ journalism and seized on his friend and former colleague Guy Faulkner’s suggestion to start a newsletter covering the dairy industry – and Dairy Industry Newsletter was born.

“Industry deregulation and the burgeoning Common Market made for rich pickings—his first big story for DIN in the UK was the seemingly inevitable abolition of the Milk Marketing Boards under farm minister John Selwyn Gummer,” says Catherine, the current editor.

“Barry was astounded at his immediate and almost overwhelming success with Dairy Industry Newsletter, not only in the UK but further afield, and in 32 years he only ever once cancelled an issue, and a conference, when forced into hospital. 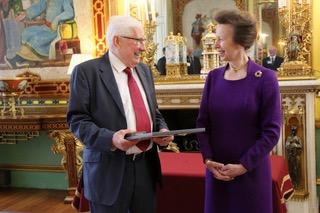 Barry also founded (in 1993) British Dairying magazine with former Big Farm Weekly colleague, the late Malcolm Bridges, and which continues to flourish with Guild member Mike Green at the helm, and with Barry contributing and commenting on milk prices on a monthly basis.

In 2018 he won the prestigious Princess Royal Award, run by the Royal Association of British Dairy Farmers, for an outstanding lifetime contribution to the dairy sector, which he received personally from HRH Princess Anne at Buckingham Palace.

“Barry maintained spreadsheets on every aspect of his life, businesses and dairy markets and prices. He was simultaneously a master of inconsistencies, irascible and terrier-like in his pursuit of a story, but ultimately a fair, loyal, proud and at times humble friend—subject, of course, to sporadic and occasionally terminal ‘ruptures’,” says Catherine.

“Barry always believed in “telling it like it is”; he once said, “Times have changed for journalism, but there are still scandals out there and I think it is the duty of journalists to uncover them.”

Guild members who would like to add their own tributes or anecdotes can send them to Peter Hill (peterhillguild@aol.com).