Ben Briggs takes over as chairman of the Guild 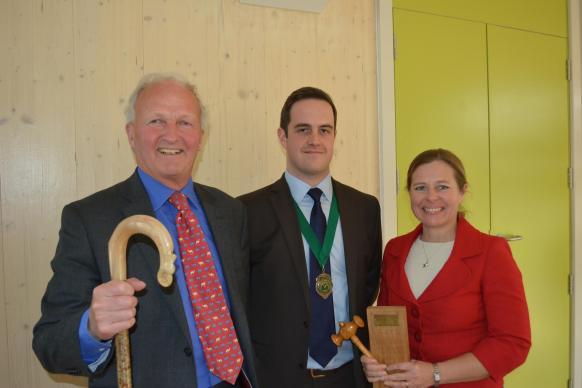 Farmers Guardian news and business editor Ben Briggs is the new chairman of the British Guild of Agricultural Journalists.

Taking over the two year post from Jane Craigie, Ben officially started his new role at the Guild AGM at NIAB TAG’s innovation farm in Cambridge on Friday, 13 March.

The event was kindly sponsored by Massey Ferguson.

A council member since 2012, Ben said priorities for his time as chairman were to make sure all members could get what they needed from the Guild.

He said: “We work in a media world that is changing all the time and that presents huge challenges for us as individuals and as an organisation.

“I want to ensure that whether you are at the start, middle or end of your career you can get the training and professional development you need from the Guild to feel secure and comfortable within your job.

“I also want members to take advantage of the many awards and travel opportunities the Guild provides.

“My own experience of a European Network of Agricultural Journalists trip to Brussels, which was facilitated by BGAJ, was one of the best professional trips I have attended.

“I would encourage all members to utilise the foreign trips on offer.”

A farmer and milkman’s son from the village of Ribchester, near Preston in Lancashire, Ben began his career as a data in-putter and livestock reporter at Farmers Guardian in 2004.

Just over two years later he left to become a reporter at the daily Lancashire Telegraph in Blackburn. He went on to become a fully NCE qualified senior reporter and business editor.

After three years there he left to become editor of Lancashire Business View magazine before returning to Farmers Guardian as news editor in November 2010.

“I am very much looking forward to my role as chairman and would like to pay tribute to my predecessor, Jane Craigie, who has been a fantastic ambassador for the Guild and wider industry.”

When not working, he enjoys fell walking and is halfway through completing the 214 Lake District 'Wainwright' fells. He also enjoys playing golf and, for his sins, supporting Blackburn Rovers.