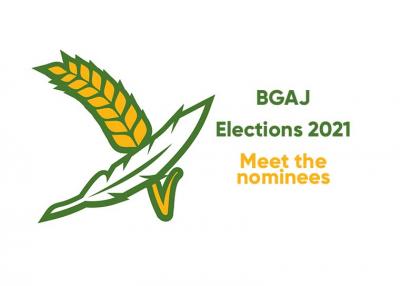 The BGAJ AGM on Thursday will include a vote for new Council members.

We are lucky enough to have had three nominations for the two open positions, and will be running the vote online. Please can you take the time to cast your vote by 12pm on Thursday 25 March so we can announce the results at the AGM.   The two positions we are looking to fill will cover responsibility for events and sponsorship, so we are ideally looking for one person with a flair for events and another with experience in securing sponsorship. We would also like to retain a balance on Council between journalists and those in PR / marketing, so as to properly represent our membership.

We are very pleased to have had three expressions of interest and are always keen to have member involvement in running the Guild so look forward to working with all three nominees in future, whether in an elected capacity or not.

The vote is for members only, and the link to vote online has been emailed to all members on 22 March. If you don’t have the email, contact Ben Pike.

Thank you for your interest.

I’ve been a member of the Guild ever since I joined FW nearly 10 years ago and although I haven’t had much involvement up until now ‘behind the scenes’ I’m keen to do more and give more back to this fantastic organisation which I’ve gained so much from.

I think there are many skills I could bring to the Council. I’m really organised, having arranged many events in my role as Livestock Editor for FW. These included a grassland event in 2019 and four rethinking cattle performance events. As well as arranging speakers and locations, I co-ordinated things such as catering and other facilities.

I enjoy thinking outside of the box and would be well placed to help brainstorm new ideas for socials and training that will hopefully appeal to a broad range of members.

I would like to be considered for a director role with the BGAJ. I have previous experience of volunteering for groups and businesses at director level. I was a board director of Shropshire Tourism for five years and was Financial Director for two of those. I was part of the management team that organised the Queen’s Jubilee celebrations at RAF Cosford when the Queen and Prince Phillip visited Shropshire. I have also been part of two Business Improvement Districts (BID’s) in the past, one in my home town of Shrewsbury and the other in Birmingham’s Southside district, which is home to many of the city’s theatres. (I used to manage a group of comedy clubs! The Glee Clubs).

I am relatively new to agriculture. I worked for the Earl of Plymouth’s Estate for six years as the sales and marketing manager for estate activities, but mainly to help run Ludlow Food Centre, a pioneering farm shop. I was very involved in the farm to fork movement between 2009-2015. I spoke at events all over the country and hosted many groups at the estate, including a group of international Guild members!

I see being more involved with the BGAJ as an opportunity to immerse myself further in agriculture and offer a pair of outside eyes in the process. I have worked in marketing all my life and was a marketing manager for nearly 10 years so I hope I can offer some help and experience. As a director of ABC I have a varied portfolio of agricultural brands and I hope that my relationship with them may be of use to the Guild in the future. ABC has supported the Guild for almost 25 years and yet we have not been involved at council level, so I would like to be one to change that and work more closely with the Guild and its members. Fingers crossed you will give me a shot!

Wow, what a great position to be in. Just two places on Council and three nominees, what a brilliant accolade for the Guild. Yes it brings a bit of competition into the process, but it’s great to see a number of us vying for the opportunity to help shape the Guild going forward and work with the committee to build on all the great work that has been achieved by the Council to date.

To introduce myself, I’m Rosie. Growing up on our family farm in Kent, I’ve always shown an interest in farming, never being afraid to get stuck-in and hands-on. Having followed my heart, I went on to study Agricultural Business Management at Reading University and was lucky enough to land a job in agricultural communications as a graduate and haven’t looked back since.

Since I began my career in communications in 2014 I have always been a part of the Guild of Agricultural Journalists and have benefited from a range of opportunities the Guild has presented and feel this is now my time to give something back.

I am particularly passionate about ensuring the Guild remains accessible to all age groups, especially those who are just starting their careers and hope that I can bring some fresh ideas and enthusiasm to the committee to make a difference in this area.

Likewise, having strong relations with the national press within my current role, building bridges with these contacts with my Guild ‘hat on’ to continue showcasing the great work of the Guild, to a broader audience, is something I would happily help facilitate.

Having seen the Guild from a members’ perspective for the last seven years, I am excited to have the opportunity to be an active member of the Council, working with the committee to plan and execute campaigns that will help develop the Guild and ultimately support an industry that I am so passionate about.