Scottish freelance journalist Bill Howatson won the 2008 Netherthorpe Award in recognition of his near 30-year record communicating to farming and lay audiences through a number of Scottish newspapers. 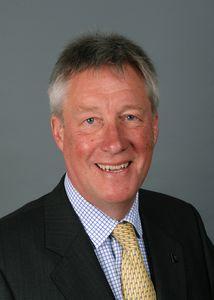 Bill was chosen from six nominations made by Guild members; they were judged by Guild president The Countess of Mar; Guild honorary member, past president and chairman of the judging panel, Tony Pexton; and 2007 winner Don Gomery.

The award is presented annually to the Guild member who among those nominated by fellow members is judged to have made an outstanding and sustained contribution to agricultural communications. It was first made in 1991 and is recognised as the Guild’s premier award.

Bill's nominee wrote: "For three decades, Bill Howatson has gone above and beyond the call in communicating the agricultural industry to the British public. Unlike many agricultural journalists, who seem to think their job is to do the industry’s public relations, Bill has questioned and criticised.

"His questions have been probing, his criticism well justified of an industry that still, in many instances, believes the world owes it a living. His contributions are incisive, his wit acerbic and his writing style a pleasure to read."

In addition to the bronze 'crowing cockerel' trophy, sculpted by former Guild member, the late Rintoul Booth and which stands on permanent display in the bar of The Farmers Club, London, Bill receives a framed certificate a meal for two at The Farmers Club to a value of £100.

Bill Howatson started his career as an agricultural journalist in 1979 as markets editor of The Scottish Farmer, moving in 1983 to the Dumfries & Galloway Standard as a sub editor and features writer.

In 1984 he was appointed farming sub editor on the Press & Journal, Aberdeen, becoming farming editor later that year and holding the post until 1996, when he left to do freelance and public services work.

He has served on the boards of Scottish Natural Heritage and the Scottish Environment Agency, as well as continuing to write regularly for the P&J and the Dundee Courier, while also having articles published in The Scotsman, The Herald and Tayside Farmer.

Bill was elected to Aberdeenshire Council in 1999, and re-elected in 2003 and 2007.  As a councillor, and reflecting his strong interest in rural Scotland, he chairs both the North East of Scotland Agricultural Advisory Group and the council’s internal Rural Affairs Working Group.

He served on the Guild council from 1989 to 1998 and was national chairman in 1995-96, holding office also as secretary and chairman of the Scottish regional group.

Bill has won several Press awards and is a Fellow of the Royal Agricultural Societies (FRAgS).