The strong entry for this renewed award, which celebrates coverage of agricultural and rural topics in regional newspapers, included the majority of Guild members working as regional journalists. 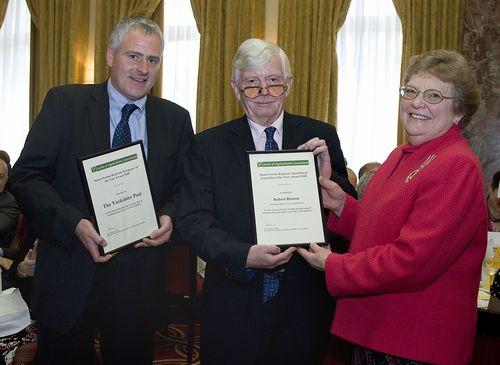 But they chose as their winner the recently retired agricultural editor of the Yorkshire Post, Bob Benson, whose work was described as "having a general crispness of style that kept his stories moving along and covered a wide range of topics aimed at a wide audience".

Andrew Vine, head of content, received a certificate declaring the Yorkshire Post as the Guild’s Regional Newspaper of the Year for its sustained, high quality coverage of agriculture.

Guild president Margaret, Countess of Mar, presented the regional journalist and regional newspaper of the year awards to Robert Benson (centre) and Andrew Vine of the Yorkshire Post.

Several entrants were singled out for high praise, including runner-up, Joe Watson of the Press & Journal, whose coverage was described as "easy to read, crisp and leaves you hungry for more".

Others praised for their work were Steve Dubé of the Western Mail; Mike Bridgen of the Darlington & Stockton Times, Alasdair Crosby of the Jersey Evening Post and Heather Jones of The Farmer published by Shropshire Newspapers.