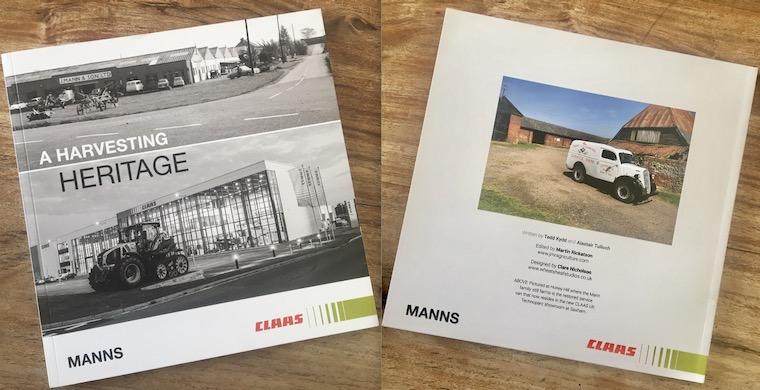 Freelance journalist and Guild member Martin Rickatson has edited and published an 86-page book commissioned by Claas UK to celebrate the German farm equipment company’s opening of its new premises at Saxham in Suffolk.

Called ‘A Harvesting Heritage’, the book traces the history of the marque in the UK from the 1930s, when Suffolk farmer Bill Mann joined his father’s family farm and agricultural machinery business, close to where the Claas UK premises remain today.

Decade by decade it follows the development of the ‘Manns of Saxham’ import business, which was later purchased by its main supplier to become Claas UK, and concludes with the completion of the total redevelopment of the Saxham headquarters, opened in the autumn.

“Trevor Tyrrell, the Claas UK CEO and senior vice-president for Western Europe, got in touch back at the beginning of the year and asked if I would be interested in the idea of putting together a history of Claas in the UK to mark the planned autumn official opening of the new UK premises, explains Martin.

“A draft history of Manns up to 1980 had been hand-written by its former works manager, and I then worked with Alastair Tulloch, the recently-retired Claas UK after-sales director, on notes for the following four decades.

“A number of different people who had worked for the business had retained old photographs over the years, and we amassed a good collection, including some from a visit to Jim Mann, Bill’s nephew, who still farms at the original Mann family farm, Honey Hill, in the lanes up behind the Claas UK premises.

“Unfortunately, face-to-face visits for interviews and photo-sourcing were then curtailed by the coronavirus lockdown at the end of March. This also meant the original plan for a full autumn opening of the new premises had to be moved online to a livestreamed and recorded event.

“However, we managed to pull the book together in time for the October 16 event.”

A special four-minute film commissioned separately by Claas UK to support the book – including photos and footage with Jim Mann and his son – can be viewed on YouTube (view from 20 minutes onwards).

The book is available to purchase through Claas and its dealers. It will also be on sale in the ‘Technoparc’ showroom part of the new facilities as soon as it can be opened fully to visitors.