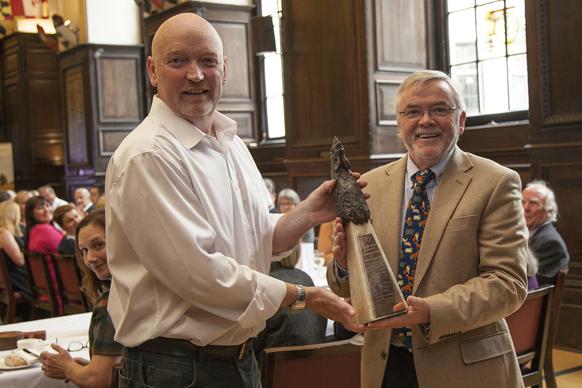 The 2015 recipient of the Netherthorpe Award has been the voice of farming news in Wales for more than 30 years.

Dei Tomos is an acclaimed broadcaster and journalist, who has never lost his zest for rooting out the ‘real’ story behind the spin.

He is an acknowledged authority on Welsh farming, its language, communities and culture, and of its place in UK and EU farming and environmental policy.

He is as widely revered among politicians, opinion formers and the Cardiff ‘chattering classes’, as he is amongst his farming fans.

Dei's popular broadcasts, in English and his native Welsh, are authoritative, while providing easy listening.

His knowledge, breadth of vision and finely tuned instinct means that no interviewee emerges unscathed – often without realising that their carefully prepared brief has been rumbled.

He regularly presents other programmes on TV and radio in both English and Welsh and is often asked to provide background, comment and advice on emerging news stories.

He also presents the half hour Saturday Radio Cymru farming programme, which follows a variety of themes, from farm visits to show reports and specials on policy changes. His mission is always to inform and educate about farming practices and policies, with losing the vital entertainment aspect.

Dei's influence extends beyond his journalism remit – he is Vice President of the Campaign for the Protection of Rural Wales and Council for National Parks.

He also served for nine years as a Welsh Secretary of State nominee on the Snowdonia National Park Authority and ten years as a member of the board of the Countryside Council for Wales.

He is an Associate of the Association of Royal Agricultural Societies and a member of the Gorsedd, the National Eisteddford Bards’ circle, one of Wales’s highest cultural honours, and in 2015 was the Welsh Radio Broadcaster of the Year nominee at the Celtic Media festival in Inverness.

He was commissioned to write a book on the Welsh Coast to coincide with the opening of the Welsh Coastal Path in 2012 and he has a continuing involvement with the Welsh Youth Organisation. He also served a long stint as a member of the Snowdon Mountain Rescue Team.

The advent of S4C, the Welsh Fourth TV Channel, gave him the opportunity to present a series of television countryside programmes.

His TV work has also included farming programmes, as well as a number of adventure and travel TV programmes.

Dei’s success is rooted in his knowledge, empathy, talent and integrity. It is also due to his credibility and respect for farming.