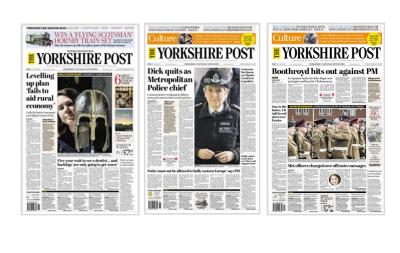 Former Guild member, retired journalist Derek Hine, who contributed to the Yorkshire Post's agriculture coverage during has career, has died.

He lived in the village of Kirkheaton in West Yorkshire and credits the 11-plus examination (taken when Secondary and Grammar schools were part of the education system) and his English teacher for sparking an interest in journalism.

Recalling his school days in the Huddersfield Examiner newspaper, he said: “The biggest change in my life was the 11-plus. We were all terrified of the test, but fortunately for me I managed to pass.

“For a working-class lad from Kirkheaton, Mirfield Grammar School provided a glimpse of different things; for one, it gave me an interest in rugby and cricket.

“My English master Mr Barker, suggested I become a journalist because I was good at creative writing and my essays used to be published in the school magazine. That was the start of my journalism career, which took me to the Examiner and the Yorkshire Post.”

Fellow Guild member Diane Montague, a Trustee of the Guild’s Charitable Trust member support fund, recalls that as a young man Derek worked on his sister’s sheep and dairy farm.

From there he moved to the Central Office of Information where he edited their magazine for a number of years. During his time at the COI he was involved in a serious car accident that left him with on-going health problems.

He then worked for the Yorkshire Post, initially as a sub-editor, before moving on to writing about agriculture; he continued to write about farming for many years in retirement, mainly for the Huddersfield Examiner.

If any Guild members who knew Derek can contribute recollections or more information about his career and farming interests, please email Peter Hill.