The Guild's honorary general secretary, Don Gomery, was the surprised and delighted recipient of the Netherthorpe 'Communicator of the Year' award, presented at the Royal Show. 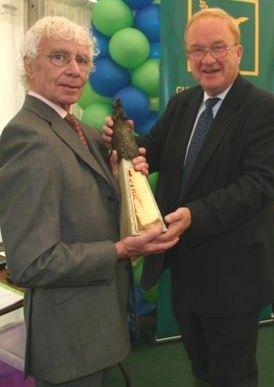 The Netherthorpe is the Guild’s most prestigious award, as it is made on the basis of nominations to a member judged to have made a prolonged, consistent and high-quality contribution to communications within agriculture and/or horticulture and the countryside.

This year's award was presented by Yorkshire farmer Tony Pexton, a former Guild president and chairman of the judging panel.

He and fellow judges Margaret, the Countess of Mar (this year's Guild president) and last year's winner, Essex farmer and writer Guy Smith, decided Don deserved the award for: "his long and distinguished service to agricultural journalism and communications in general, as well as to the Guild of Agricultural Journalists in the UK and abroad."

Don Gomery started his career in agricultural journalism in 1960 as a features writer for Pig Farming and Dairy Farmer magazines before moving to Dairy Farmer a couple of years later. He then spent seven years as its editor.

Don moved to Farmers Weekly in 1973 as UK political correspondent, became European correspondent, then business editor and finally deputy editor, before moving into the world of public relations with Pharo Communications in 1986 as a director and company secretary.

Upon leaving in 1998, Don became a freelance writer, in which guise he works as editor of The Farmers Club Journal, the newsletter of the Worshipful Company of Farmers and World Wide News, the monthly newsletter of World Wide Sires UK.

Despite this busy workload, Don finds time to handle the endless administration involved in keeping the Guild running, while also representing the organisation at International Federation meetings.

He has been honorary general secretary for 22 years now and during that time has been involved in some way or other with just about every event the Guild has staged, including International Congresses held in Britain in 1987 and 1997, while also helping look after the Guild’s Charitable Trust as its secretary.

All in all, a well-deserved recipient of the bronze 'Crowing Cockerel' trophy, which is displayed year-round in the bar of the Farmers Club in London.