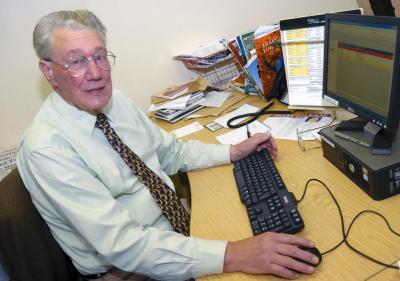 Long-time Guild member Gerry Barnett has died at the age of 89, reports the Evesham Journal.

A well-known Worcestershire journalist, whose career spanned almost 70 years, Gerry was a fierce champion of the farming community, the countryside and local produce – on occasions delivering Vale of Evesham asparagus to Buckingham Palace and top London food venues as part of the British Asparagus Festival.

Gerry joined the Evesham Journal in 1949, later taking over as agricultural correspondent for the Journal series in Evesham and the Cotswolds, and becoming a familiar face at all major farming and agricultural events in the Midlands. He also worked for the Gloucestershire Echo, based in Evesham.

But journalism had not always been his dream; Gerry planned to become a policeman in his earlier years before his careers teacher recommended applying for the Journal's vacant sports reporter role; his first job was to report on Evesham United's 21-0 thrashing over Evesham Town Amateurs and Gerry went on to cover many notable events in the area, including the time when a circus lion ate its trainer on Crown Meadow!

In 2003, Gerry’s long association with the CLA Game Fair was recognised during a Press reception at Ragley Hall, Warwickshire, when he was presented with a bottle of English ‘champagne’ by Ollie Wilson, CLA Game Fair director of communication.

Mr Wilson noted that Gerry, a long-standing member of the British Guild of Agricultural Journalists, had by then already achieved a remarkable record of 64 years in journalism, starting with the Evesham Journal, and had always been closely connected with farming and the countryside. 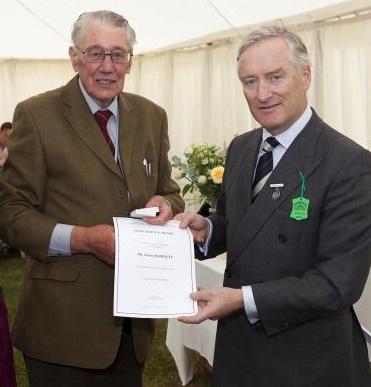 “Gerry was at the very first CLA Game Fair in 1958 and had been to the great majority of them ever since,” Mr Wilson said. “He was a true English country gentleman and a credit to journalism.”

A countryman to his very core, Gerry lived in the same village as the well-known country author Fred Archer and, in common with many traditional people in the area, tried his hand at producing his own food, including rearing a pig.

He was a well-known local stringer for many bigger news organisations further afield and the name of Barnett of Evesham was regularly mentioned in newsrooms at the Birmingham Post & Mail, BBC Midlands Today and ATV Today, as well as by members of the Midlands pack of national daily reporters.

Farmer Charles Archer said: "Gerry has been a part of Aston-under-Hill all of his life, always working for the community," said Mr Archer. "He was a countryman at heart and a stickler for doing things in the right way. He was a tall man of course, but he was truly a giant in terms of the respect he generated."

Sharon Gilbert, former PR manager at the Three Counties Showground, described him as: "A consummate professional, a dedicated journalist and most importantly, a kind and decent man."

Gerry Barnett’s funeral will take place at Ashton-under-Hill Chapel at 12.30 pm on May 30.