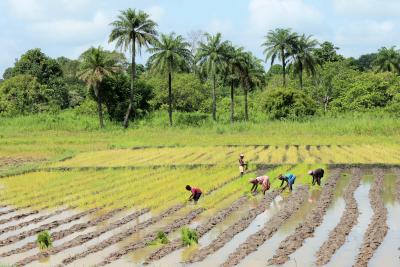 Guild members are invited to apply for a study and press trip to Guinea in western Africa, in October.

Blessed with fertile soils, diverse climates and plentiful water, Guinea was once the most notable agricultural producer amongst the former French colonies of West Africa.

But its farming sector has collapsed. Subsistence and smallholder agriculture is the norm; despite agriculture employing up to 85% of the population, the country is now a net food importer. Rice accounts for nearly 40 per cent of all food imports, with wheat flour a close second. Both are staples of the Guinean diet.

Becoming more self-sufficient in these foods is a prime objective for Guinea’s government. By its own admission, only half of the country’s potential arable land is currently exploited, with just 10% in regular, annual cultivation. Reinvigoration is the name of the game: the government has adopted a National Agricultural Development Policy (NADP), tasked with creating a modern, sustainable, productive and competitive agriculture that delivers both domestically and internationally.

Besides the rice and wheat staples, the NADP has also revived Guinea’s cotton production, supported development of rubber and palm groves, and encouraged more farmers to grow cash crops such as coffee, bananas, mangoes, pineapples, avocados, tomatoes, potatoes and other produce. Foreign investment has also been sought to inject new technology and innovation, and stimulate research and development projects.

Yet it’s the typical factors that still hold back the sector: access to land, access to finance, access to markets, coupled with poor transportation and disconnected supply chains.

Against this background, the Association of Media and Agriculture for Rural Development (AMEDAR) is attempting to bring knowledge and understanding to Guinea’s agricultural sector. Its chairman, Alpha Ousmane Souaré, works at radio station FIM 95.3, hosting La Guinée Rurale every Saturday. In his hour-long programme, Alpha talks about the realities, difficulties and experiences of this sector, but also tries to talk up the advantages of agriculture – especially for the young people who are tempted by the cities or even a new (not always legal) life overseas.

FIM is one of the most popular radio stations in Guinea, enjoying the support of those within both pertinent ministries, Agriculture and Environment. However, the importance of agricultural journalism is not yet fully realised in Guinea, despite the NADP.

AMEDAR, an IFAJ member, has a membership of 12, of which only four or five are regularly active throughout the entire country. Despite agriculture’s economic prominence, FIM is the only station – of 10 – that broadcasts agricultural content, while the Ministry of Information and Communication does not recognise agricultural journalism as an individual discipline.

AMEDAR has invited up to five members from the British Guild to travel to Guinea between October 10 and 16, 2022. The visit will include ‘experience sharing’ with Guinean agricultural journalists; media visits to the capital, Conakry, including the Ministries of Information, Agriculture and Livestock, Fisheries and Environment; meetings with press associations; and visits to Kindia, Forécariah and Boké, agricultural production areas close to Conakry.

Attendees will be responsible for round-trip travel expenses as well as visa fees; travel cost support may be available for applicants who need this and will be reviewed on a case-by-case basis.

All local costs – accommodation, meals and transportation – will be covered by AMEDAR. Successful applicants will also need to ensure that they have travel insurance suitable for the country and their travel plans. Vaccinations may also be required.

Members interested in applying for a place on the trip should e-mail adrian.bell@agromavens.com and jane@janecraigie.com by Monday, 11th July. Prospective participants should explain their interest in the trip, how they expect to benefit from it, and what opportunities they see for post-trip reporting and coverage.