Members get together at 2012 Royal Welsh Show

There was an excellent turnout of members and fellow journalists at the Guild’s first reception at the Royal Welsh Show – so much so that there was very little elbow room in the venue set aside for the gathering on the ringside stand of event sponsor NFU Mutual!

“We really had little idea how many members and guests would come along but I’m delighted that so many did; it was great to meet up with so many members at what proved to be one of the few sunny and dry show this summer,” says Tim Price, Guild treasurer and NFU Mutual communications officer.

“If we repeat the event again next year, as I’m sure we will, I’ll find a larger space to hold it in – and double the beer order.”

More than 50 members and guests attended, illustrating the appeal of an informal gathering at which journalists, photographers, broadcasters and PR specialists can socialise at the end of a busy first day.

Guild member Nick Bond, press officer at the Royal Agricultural Benevolent Institution (RABI), took the opportunity to launch the charity’s 2013 calendar at the reception, which was attended by several of the Guild member photographers who donated images.

Sponsored by the NFU Mutual Charitable Trust, the Farming in Focus calendar features seasonal images of agricultural and rural scenes and is a very popular fund raiser. 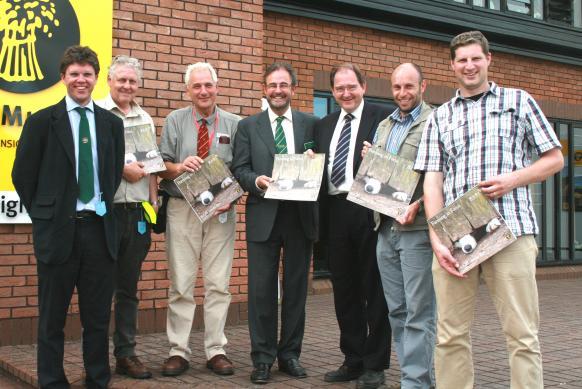