More to US agriculture than tariffs and Trump 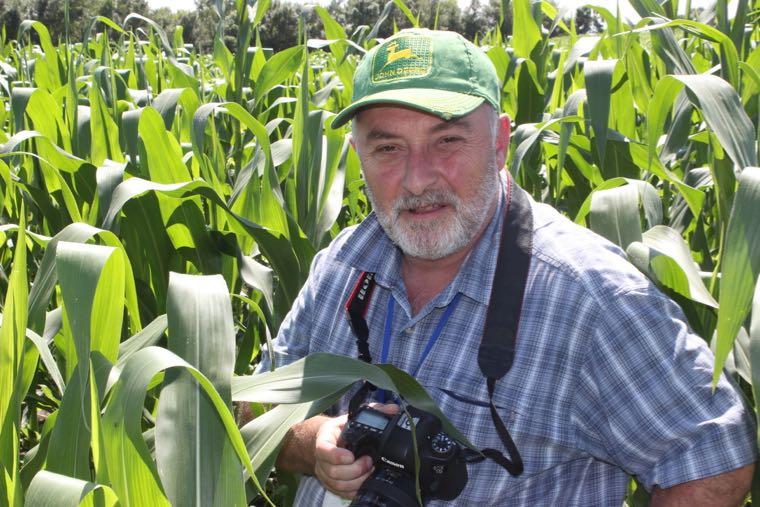 The Joe Watson Legacy Fund provided a bursary for Mick Roberts to attend the 2019 International Federation of Agricultural Journalists' Congress in Minneapolis, USA. In this report, Mick (pictured above) reveals what he saw and learned – and how he feels others will benefit from future events.

For journalists from around the world gathering in Minnesota, USA, for the 2019 IFAJ Congress this July, it was fairly obvious what was going to dominate conversations – Trump and tariffs. For the UK participants, it was also hard to avoid inevitable questions and conversations about Brexit.

A long and intense discussion about Brexit with a German journalist, on the bus from the airport to the hotel, probably wasn’t the easiest entry to the Congress. How do I explain this and that, what are implications of the backstop? As a farm machinery specialist, I was tempted to revert to my own backstop: ‘I don’t know, I done metalwork’! 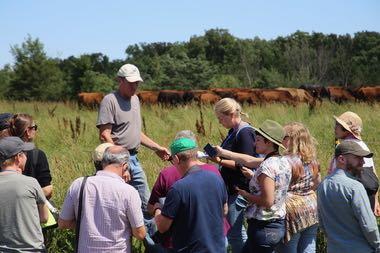 As a machinery journalist for 30 years, I am used to travelling to large international press conferences, where we meet friends from all over Europe. We attend the same trade fairs and share many late nights in hotel bars in cities and countries we rarely get to see.

At the Congress, however, I had the opportunity to meet journalists from all over the world – from Australia to Austria and beyond. Arriving at my first ever event, I quickly realised there are quite a few IFAJ Congress regulars as I watched colleagues embrace, laugh and catch up on a year’s worth of news.

I thought of Joe Watson and how he loved attending IFAJ Congress. I thought of the privilege and opportunity I had been offered by Joe’s Legacy fund, which had made my journey possible.

Travel, meeting new people who share my same interests and learning from them is not only my job, it’s my passion. So the opportunity to attend IFAJ Congress, by applying to the Joe Watson Legacy fund was a chance I couldn’t resist. I also love travelling in the USA.

I’ve been to Minneapolis before – but never on the Mississippi. So it was with great joy I stepped on to the Padelford Riverboats’ Betsey Northrup for the welcome party. I met many, many colleagues who knew Joe and were really interested to learn about his legacy fund. We had a few toasts to remember him that night. 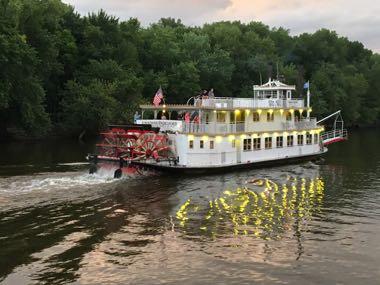 Congress offers an enormous choice of opportunities and it takes some assiduous juggling to plan the day to ensure you attend your must haves, while not missing too much else. I also had to split my time with attending seminars at the Ag Media Summit, which at times ran concurrently.

Everyone, however, has the opportunity to see the two luncheon speakers, with Daphne  Pellegrino from Reporters Without Borders speaking about freedom of the press.

While I’ve had a few shouting matches with companies, been banned from attending press conferences, threats of being sued etc, I’ve never felt any fear.

When she talked about ‘self-censorship’ this hit home. I cannot honestly say I have never yielded to pressure from an advertiser – consciously and unconsciously. I feel a few more shouting matches coming up!

Ah, and then we get to President Trump! It was going to come up and Congress organisers faced this head on (remember like Brexit – he is dividing the country). John Rash, a Washington reporter with the Minneapolis Star newspaper spoke eloquently about Trump’s impact on the news media.

A thoughtful and sobering talk, particularly when he referred to how he struggles to explain it all to his young son.

With Brexit possibly opening up the opportunity to use GMOs in the UK, the talk by Dr. Jim Bradeen was another must see for me. A Professor of plant pathology, he explained how his department is using the latest genetic approaches to quickly incorporate traits from wild populations to produce disease resistant potatoes, wheat and other crops. Fascinating research that cannot be ignored and must be defended against attacks from the uninformed ‘anti’ brigade.

Congress does also, of course, take the delegates outside onto farms and agricultural enterprises. Being a large country this also involved a few long bus trips, which suited me fine – time to see the landscape and talk to fellow journalists about what we were seeing.

First impressions – well, the USA is a very different place to when I worked there in the 1980s. Flying from Chicago to Minneapolis reveals America’s ‘Heartland’ and here, however, the farmland hasn’t changed much – miles and miles of land divided into square sections by gravel roads. 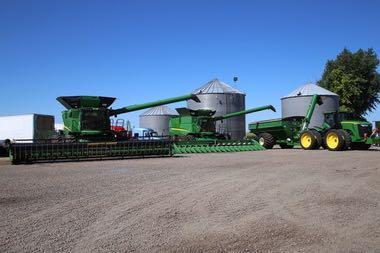 A ‘Section’ is 640 acres (260ha) or one square mile and in this part of the country there’s usually just one house – a farmstead – in each section. While Minnesota has a rather more mixed farming environment, go a bit further west and south into Iowa and it’s Corn (maize) and soybeans (virtually all GMO) for as for as far as you can see.

These are the farms I wanted to visit and to see through the eyes of American farmers. After severe flooding preventing spring crops from being sown, followed by virtually no rain in other areas, as well as the crippling tariffs things were not looking great for the Heartland’s farmers.

Out on the farms, however, while the thorny question of tariffs was raised by some journalists, the hosts seemed fairly unfazed by the situation. The stoic farmers in the ‘Heartland’ are pretty tough and most have seen, and coped with, far worse.

At Wagner Farms we heard how its owner, Darin Wagner, and his family are moving to precision farming to improve productivity and profit.

A, quiet and obviously thoughtful man, Darin became more animated when it came to talking to me about his fleet of what I would consider ‘classic’ tractors, which he uses to power implements equipped with the latest technology. The ‘Classic Tractors Power Precision in the Prairies’ article is coming along nicely!

It’s a common misconception, for those of us that live outside the USA that its farmers are not constrained by environmental restrictions. At the next stop, however, we learn how nine farmers in the Cannon River Watershed Partnership are using min-till, strip-till, no-till and cover cropping to reduce erosion and run-off.

With 855 acres - 25% of their total area – planted with cover crops these farmers prevented 3,865kg of nitrates and 10t of soil reaching watercourses. At the same time they are installing buffer zones and silt traps.

This is all part of the Minnesota Pollution Control Agency’s efforts control the run-off to tributaries, with run into the Mississippi river. This is important because this runs all the way to the Gulf of Mexico, which is suffering from high levels of soil-borne pollution.

Back on the bus and another day, different farms and more contrasting operations. First we visit the Sullivan Family Farm: Imagine your typical mid-west farming family and you would be correct – big, smiley and very welcoming – the family that works and plays together sticks together! 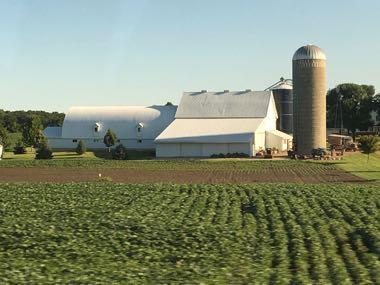 Mike Sullivan’s grandfather first ‘homesteaded’ the farm when the USA was being colonised by immigrants (oh the irony). Mike returned with his wife Jane in 1968 and since have been joined by their sons – Tim, Pat and Joe, while their sister Molly teaches at a local school.

With a big and expanding family the Sullivans need a clear succession policy: “It is not your right to farm – you need to earn it and ensure ‘your’ plan fits into ‘our’ business plan.”

The sons all run various enterprises, with Joe who is the business manager, explaining the 12,000-acre (4,800ha) farm needs to expand or diversify to accommodate their return.

Cropping revolves around corn and soybeans and, today on top of their own land, they stubble to stubble contract farm a further 5,000 acres (2,000ha), run contract spraying and harvesting operations as well as spread poultry manure. The goal, however, is to always buy more land.

After this brief glimpse into the modern, progressive business where all crops are GMO, it was time to look at another family’s alternative approach to farming similar land.

Grant Breitkreutz, runs Stoney Creek Farm with his wife Dawn and family. Here they practice regenerative agriculture, which isn’t organic and certainly not sustainable. Why would you want to sustain a degraded resource, he says?

Their aim is to regenerate the land and fix it for the future. This involves no-till, cover crops and running cattle across every field in rotation. As well as seeing flora and fauna return in vast numbers, the farm is also realising that their alternative makes them less reliant on the commodity markets and outside influences and is increasing their income.

Without relying on GMO crops and other costly inputs their margins are increasing, spending $63/acre less on seed and $11-$30 less on herbicides, with glyphosate now the only one they apply. Cover cropping is keeping down the weed burden. The farm is now receiving a $1.20/bushel premium for its non-BT soybeans to a buyer that needs more.

The Red Angus cattle is fed on the farm’s own grain and are 100% grazed. The meat is now sold locally, at a premium, through farmers markets and other outlets.

So what did I get from the Joe Watson’s legacy fund’s bursary to attend the IFAJ?

Firstly it allowed me to return to the USA – always a pleasure for me! More seriously, like my job at home, it took me to places I would never normally be able to go, meet extremely interesting new people and learn more about their farming, businesses and family life.

In the evenings I met journalists of all ages and experience, from all over the world. We exchanged ideas, views and argued! The only way you can inform your own opinions and learn is to see the world through another person’s eyes.

As journalists we should all remember the line from the poem ‘Judge Softly’ by Mary Lathrap: “Walk a mile in his moccasins...”