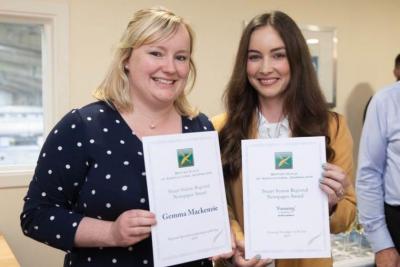 Entries have opened for the Guild’s 2021 Stuart Seaton Award which celebrates high quality coverage of farming and rural affairs by local and regional newspapers.

The award, which is made jointly to a journalist and their publication, recognises the information and insight such coverage provides to farmers and the non-farming public alike.

It was established in memory of Stuart Seaton, the highly respected founding editor of Farmers Guardian, once a regional newspaper but now a national publication.

For the first time this year the award carries a £300 prize pot, thanks to new sponsor, Farmers Guardian.

Editor Ben Briggs said: “As someone who was trained in the pressure cooker atmosphere of a local daily newsroom, I understand the invaluable role local newspapers play in their respective regions, often providing context and analysis for readers which is tailor made to their needs and wider concerns.

"Stuart Seaton is one of the great names to have edited Farmers Guardian, and I am really pleased we can support this award and showcase the exceptional calibre of agricultural journalism across the UK."

Val Chapman, Stuart’s daughter, is also a journalist and editor and is a member of the judging panel.

Val Chapman said: “Three decades and more have gone by since my father passed away; three decades of technological and media change that would be unimaginable in the era in which he edited Farmers Guardian. And then came the unparalleled challenges of 2020.

“Some things, though, do not change – and one of them is the need for top-class agricultural journalism, as vital now as it was 30 years ago.

“This award is a celebration of excellence, showing off the very best that this ever-evolving industry has to offer. It is, of course, an honour to be part of the judging team for the Stuart Seaton Award and I very much hope we will see plenty of entries for the 2021 award.”

When the award was last run in 2019, it was won by Aberdeenshire Press and Journal farming editor Gemma Mackenzie.

Gemma received a certificate commemorating the award, while the Press and Journal earned the right to publish the 'regional newspaper award winner' citation on its masthead.

Attention now turns to finding a 2021 winner from the range of newspapers and magazines that provide local readers with news, analysis and insight into farming and the rural scene in general.

The Stuart Seaton Award is open to all such publications, editors and correspondents, not just Guild members.