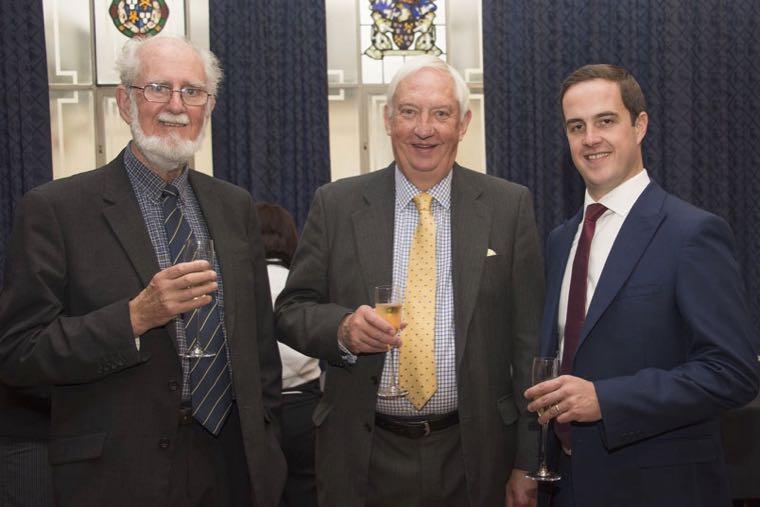 Long-standing Guild Member Max Reader (pictured above, centre, at the Guild's 2017 Harvest Lunch with Alan Stennett and Ben Briggs) has died aged 78 after a short illness.

Max served on the Guild’s management council for several years and at the time of his death mid-October was a valued and respected trustee of the Guild’s Charitable Trust, which helps members young and old when faced with personal difficulties.

In business, he was particularly well known to machinery journalists for his work with former colleagues at Agripress Publicity, the late Ray Grater and Derek Watson.

The following obituary is written by Stephen Howe, a friend of Max and chairman of the Guild’s Charitable Trust, who says: “I have been privileged to know Max since 1971. He was a gentle giant, always a perfect gentleman and a true professional in all he did.”

A funeral service will be held at 2pm on Wednesday, 14 November, 2018 at St Mary's Church, Radwinter, near Saffron Walden, Essex CB10 2SW.

If you are really fortunate in this life, you will meet a number of individuals you can count on as a true friend: That is someone who is consistently reliable in their intentions, cares genuinely about the people they know, and who are prepared to offer a helping hand to anyone who might need it.

Max Reader, known as Peter to some of his close family and friends, was just such a person. I was fortunate to enjoy his company for more than 47 years during which time I came to know this self-effacing gentleman well.

Max was a true professional in everything he did. He was an excellent communicator and writer with an eye for detail. He was also blessed with a dry sense of humour making him great company at any occasion.

His journalistic career began as a general reporter on The Harlow Citizen in 1957. Two years later he moved to Northumberland as a freelance covering mining and North Sea industries. A short spell as a court reporter followed where he was able to put his self-taught Pitman short-hand to good use.

Max’s next career move proved to be the foundation for his much respected vocation in agricultural journalism and eventually public relations. In 1960 he joined Agricultural Machinery Journal, one of seven titles under the Farmer and Stockbreeder Publications banner which became part of IPC Agricultural Press and later Reed Business Information.

These were exciting times for the UK’s farm machinery industry, which had begun to accelerate rapidly in the ‘60s and ‘70s in response to the increased demand for food production from home and abroad. AMJ came into its own having a core readership of machinery dealers, manufacturers and suppliers and the publication was well received and respected.

As was his style, Max soon became absorbed in the farm machinery sector and the personalities involved within it. He rapidly made his mark on the industry and within AMJ’s publishing company, which resulted in his promotion to Editor.

Max’s editorial talents, personality and people skills were lost to AMJ when he was approached in 1970 to join Agripress Publicity, one of the few agricultural public relations companies at that time.

He complemented the existing team perfectly and his passion and diplomacy helped the firm build an impressive list of clients including Bamfords, Ford Tractor Operations, Howard Rotavator, Howard Harvestore, Parmiter and Vicon to name but a few.

They also included two of the leading trade bodies of the day: The Agricultural Engineers Association (AEA) and the machinery dealers’ organisation, now known as the British Agricultural and Garden Machinery Association (BAGMA).

Given that background, it came as no surprise that Agripress was selected to handle the Royal Smithfield Show, held annually at Earl’s Court in London and run by the AEA, the Society of Motor Manufacturers and Traders (SMMT) and the Royal Smithfield Club representing the livestock sector.

Because of the vested interests involved, handling the public relations demanded a great deal of tact in the run-up to, during and after this showcase event held at the beginning of December. And there is no doubt that Max led the way on that score.

He was also front of house in the press room, building a special rapport with many of the regulars, particularly those down from Scotland. Together with his Agripress colleagues and show manager Mark Bellamy, Max also looked after the Royal visitors, including the HM Queen Elizabeth, the Queen Mother, who rarely missed a year and exhibited in the Royal Smithfield Club livestock classes.

Outside of his busy workload work at Agripress, where he became managing director, he found time for two of his other passions: rugby and sailing. He was the founding member and President of Saffron Walden Rugby Football Club which kept him busy in the season.

But there was nothing he liked more than to escape to Blakeney Harbour in Norfolk with his wife and family where they had a holiday retreat and a Norfolk Oyster sailing boat.

Despite his busy home life after retirement, Max Reader helped to build the Guild’s Charitable Trust into a robust organisation. His contribution as a Trustee was typical of the man, always providing wise counselling, compassionate views about those in need of help and practical solutions when difficult decisions had to be made.

For Max’s help as a valued Trustee, his contribution to agricultural journalism and the agricultural industry as a whole, we are very grateful and will always remember him as a true friend and gentleman.”

Graham Fuller, former Farmers Weekly machinery editor, recalls that it will be 50 years ago next summer that he walked into the IPC offices at Dorset House, just south of Blackfriars Bridge, for his formal interview as a cub reporter with Agricultural Machinery Journal (AMJ).

“On my way out, Max gave me a wink and asked whether I would be prepared to front the Royal Show, just days away,” he says. “The rest is history as he began the arduous task of mentoring me in the dark arts of sub-editing, headline writing, hot metal presses, and more besides.

“I can still recall him looming over my desk and, with a twinkle in his eye, outlining the tasks ahead in those early days. “See what you can make of this,” Max would say, tossing me a train ticket to wring some words out of Manchester chain giant, Renolds. I gulped.

Or; “Get yourself to Edinburgh, hire a car and take a week to find out what’s what in the Scottish farm machinery industry.” I nodded dutifully.

Even: “I’m sure you’re up to covering this one,” referring to the giant DLG international machinery event in Cologne and causing much wobbling of knees on my part!

“However, just as I was beginning to learn from the fruits of his great wisdom, the blow of his move to Agripress struck home. But this is where his unrivalled people-handling abilities came to the fore.

“No ask was too much for Max, including who to contact for that vital quote, an advance copy of some up-coming speech, a whisper of a likely story lead.

“Always impeccably turned out, prior to me migrating to Australia, he’d begun organising an annual sailing day for some of his mates at West Mersea. Here, in off-duty mode, we’d swap stories about this and that, and generally put the world to rights. There may have been some grog involved, too…

“I owe all my good fortune in the print industry to him; a top all-round bloke who will be sadly missed.”

Fellow trustees of the Guild’s charitable fund added their perspectives, including Denis Chamberlain: “What a very sad day for us all. Like many, I have known Max for over 40 years during which time he has been a colleague, friend and inspiration.

“Always good humoured, self-effacing, great company and just about the epitome of the professional communicator. His contribution as a Trustee was typical of the man – compassionate, practical and always properly thought through. A hole has been left in the lives of all of those who have been privileged to call him our friend and colleague.”

Nick Bond added: “My memories of Max stretch back to when I joined Agroup 49 years ago and despite Agripress being a rival company, competing for clients, I will always remember his easy manner and professionalism, which was to grow into a valued friendship. His wise counselling at trustees' meetings will be greatly missed.

Clive Rainbird, the Guild’s officer for liaison between the management council and trust fund, said: “My involvement with Max is much briefer than most, but in that time I came to know him as a lovely, warm-hearted and gentle man. He will surely be greatly missed by his family and friends.”

Wendy Ryder wrote: “I can’t tell you how sorry Peter and I are to hear this news. We have known Max for as long as I can remember. He was such a lovely man and such fun; it has been a privilege to serve as a fellow trustee with someone who was always so wise and compassionate.”