Guild member Peter Hall was the delighted recipient of a certificate naming him regional farming/rural affairs correspondent of 2010. 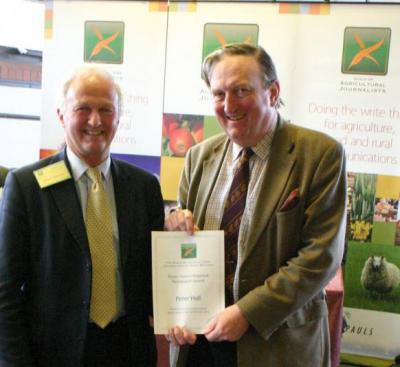 Peter (above right), who received his award from Guild president Lord Cameron of Dillington at the annual meeting, has a regular Farming section in the Western Morning News covering south-west England.

He was praised by the judges of the Guild’s Stuart Seaton regional journalism award for his ability to understand and communicate a wide range of subject matter relevant not just to agriculture but also other rural industries and concerns.

“His strong editorship ensures the whole publication is strong on content, while retaining an open and approachable style,” said the judges of his work.

“Peter’s style and knowledgeable reporting should endear his writing to a large cross-section of WMN readers and convey valuable information.”

The Western Morning News, which is awarded the title Regional Farming Newspaper of the Year 2010 for its consistently high standard of agricultural and rural affairs content, covers a region with a strong sense of identity and where farming remains a significant player within the local economy.

In October 2010, Peter took over as Farming Editor of Western Daily Press, following the retirement of Chris Rundle, in addition to his existing role.

“Which means,” explained Peter, “that I'm putting together different 6-page and 8-page farming sections for the two newspapers covering an area that extends from Stow-on-the-Wold in Gloucestershire to Lands End!"