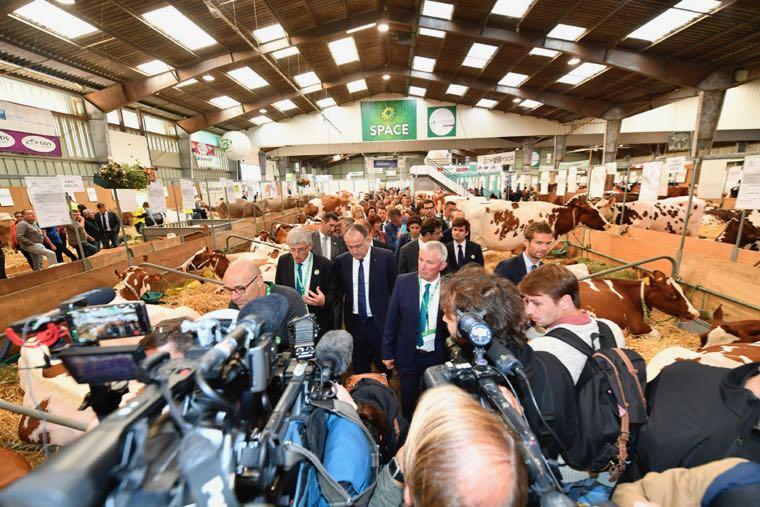 Does any other nation handle agricultural events with quite the same aplomb as the French?

SPACE – the annual livestock extravaganza that takes place in Rennes every September – suggests no exception to that rule.

More than 100,000 visitors came flocking to this year’s spectacle, writes Adrian Bell, who visited the show as the British Guild’s ENAJ representative, complemented by 1,400 exhibitors and 560 cattle.

Oh, and the Minister for Agriculture is more-or-less on a three-line whip to attend – no last-minute will-he-or-won’t-he expectations here.

Now in its 33rd year, SPACE could never be described as half-hearted.

Brittany’s flagship agricultural event confirms the region’s unshakeable reliance on farming: agricultural employment, nearly twice the French national average of 2.3 per cent, accounts for nearly a third of jobs in some areas.

One in three French chickens is produced in Brittany; nearly two-thirds of French pork; one-fifth of vegetable production and one-quarter of French butter

This is a locale where food truly matters: more than 10 per cent of Breton farmers belong to Protected Food Name schemes, selling their produce under PDO, PGI or TSG labels.

It’s hardly surprising that no burger stalls exist amongst the show’s food offering; instead, visitors take their pick from traditional French cuisine, including mussels, raclette and of course the obligatory three-course-with-wine, sit-down bistro-style dejeuner.

Naturally, it’s a fitting showcase for French agriculture, recently named by The Economist as the ‘most sustainable model worldwide’.

That sobriquet was much in evidence this year, with the show scheduled just days after the G7 summit and only a few weeks after the publication of the IPCC report. Climate change, and the effect upon it of animal agriculture, topped the agenda.

A whole section of the exhibition – Espace for the Future – was dedicated to a wide range of pragmatic and financially viable solutions for greenhouse gas reduction, energy production and energy-efficient systems for livestock buildings.

Companies here use SPACE as a launch venue for new developments, encouraged by the organisers’ INNOV’Space Awards – designed to identify and reward products that offer new functionalities and benefits to livestock farmers or sectors.

From the 135 applications submitted to INNOV’Space this year, comprising a diverse set of products for dairy, poultry, pig, feed and machinery, 46 were judged with special merit.

One of this year’s stand-out recipients was the Eye-Breed, from French firm AXCE. Simple yet effective, it’s an insemination tool for dairy cattle that uses an in-built camera to beam an image direct to a smartphone, helping the operator to visualise insemination in real time.

Improving cow welfare and speeding up operator training, French dairy farmers are already using it – and the developer’s looking for a UK distributor.

For an agricultural journalist, however, what marks out SPACE is the organisers’ support and provision for the press. Around 380 journalists attend the event: three-quarters of them French, the balance drawn from 35 countries.

Travel on a speedy TGV between Paris and Rennes, hotel accommodation, food vouchers, comfortable press facilities and a lively press dinner afford journalists time and space to pursue stories and put the show’s importance into context.

It’s a tremendous opportunity to uncover fresh thinking and new ideas, to understand animal agriculture through a different lens and to share that with a diverse readership outside France.

Not forgetting, of course, the chance to meet a whole scoop of international journalists writing for markets as diverse as China, sub-Saharan Africa and South America – albeit the press corps is far outranked by the show’s 14,000 visitors from 122 countries.

For British Guild members specialised in livestock production, SPACE is an untrammelled opportunity. I’d heartily recommend a visit in 2020.