Press Release of the Year


This award is no longer being run.

Framed certificate for the best individual press release written by a Guild member or for consistent excellence in the writing and distribution of press releases.

This award, organised by the Guild's Midlands branch, recognises and encourages excellence in the writing and distribution of press releases among Midlands branch members (see Year Book listing).

The judging criteria will focus on news worthiness and/or technical content, consistency of quality, clarity of writing and style.

The 2007 entries were judged from the press releases received by Cedric Porter through 2007 when he was editor of Farm Business, the 2007 winner’s certificate was presented to a delighted Jo Palmer of Prime Contact Communications during the Cereals 2008 event. 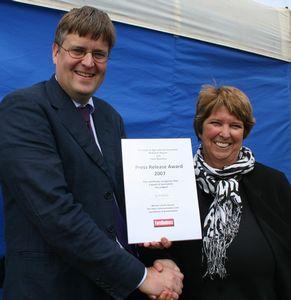 The press release, issued on behalf of Law's Fertilisers, highlighted the pressures on fertiliser components posed by the familiar pressures of a growing global population, rising standards of living and the drive to produce environmentally friendly biofuels.

"Jo's press release highlighted a real story that could be followed-up - as we did - while serving the client by 'selling' the product subtly rather than blatantly," said Cedric. "I was very impressed with the quality of farming press releases generally. The people who write them seem to be much better informed about their subject than is often the case with their counterparts in other fields, they can write well and appreciate the angle that journalists might be looking for."

"It means email in-boxes don't get clogged up with attachments but photos are available immediately," he pointed out.

At the risk of causing offence, a release worthy of a 'wooden spoon' award was also selected - happily not from an agency or company active in the agricultural or fresh produce sectors.

For an example of how not to begin a release, unless the aim is to discourage editors reading beyond the first paragraph