The Road Ahead - Seven young farmers discuss what next 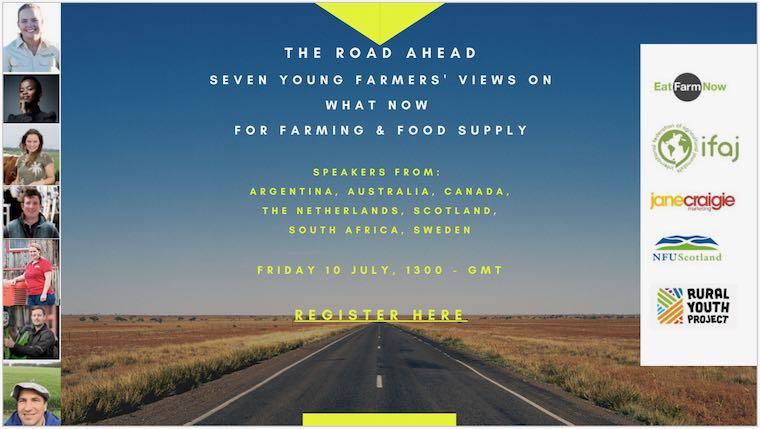 The road ahead - Seven young farmers discuss what next

This Friday from 2-4pm, a young farmers’ panel debate on what next for food and farming will be debated from the perspectives of seven young farmers from Argentina, Australia, Canada, The Netherlands, South Africa, Sweden and the UK.

The event has been organised and will be hosted by Jane Craigie, following the interest in the Agricomms Zoom Rooms she has been running during lockdown. The event is being partnered by EatFarmNow, IFAJ, Jane Craigie Marketing, NFU Scotland and the Rural Youth Project.

Aimed at agricultural journalists from around the world, the panel is of a very high calibre. “The young people joining me are all in leadership positions in their countries, and represent a very wide range of sectors,” Jane says.

EMMA AYLIFFE, AUSTRALIA – Chair of the Young Farmers’ Champions Program and director, consultant and researcher with Summit Ag, an agricultural consulting business based in the Riverina and Central West regions of NSW. Emma is passionate about developing the space and programs that allow young farmers to gain confidence to tell their great stories and share them with consumers through programs like The Archibull Prize. Beyond this she encourages young farmers to seek their own audiences.” As owner of a small business and a working farm Emma has experienced challenges in recent years, which give her empathy towards her clients and the ability to celebrate with them when seasons change.

COLIN FERGUSON, SCOTLAND – Dairy farmer in the Machars on the South West of Scotland. A partner in the business which he runs with his Dad, Mum and Brother, they milk 450 Friesian cows on two blocks of land covering 325ha. The family are a Farmer owner in the ARLA Foods Cooperative where they sell their milk and have spent the last two years investing in the business expansion. They are now currently looking at ways to reduce costs and drive output. A former Chairman of the National Farmers Union of Scotland (NFUS) Next Generation Group, he now holds the position of NFUS Dumfries and Galloway Chairman and sits on the NFU board contributing and driving government consultation and policy. He has a keen interest in technology and is continually trying to incorporate it into his business to aid efficiencies and data recording.

MARIJE KLEVER, THE NETHERLANDS – a young dairy farmer involved with NAJK, the Dutch young farmers union. She grew up on a dairy farm in the Meern, near Utrecht. She studied Animal & Livestock farming followed by a Masters in Innovation and Rural Development at Wageningen University. In 2017, Marije took over the family business of 100 dairy cows. She says: “As a young farmer, I see many developments in dairy farming. Developments that concern younger dairy farmers. Our generation looks over a longer period than the older generation of dairy farmers. I therefore think it is important that young dairy farmers also have a voice. We are all taking steps towards a sustainable future, and I would like to actively commit myself to that.”

STEPHANIE MAYNARD, CANADA – Past-President and Treasure of the International Agritourism Association. She is also Vice-President of Expo Ormstown, her local county Agricultural Exhibition. She farms 250 acres with her husband producing fruits and vegetables, 100% of which they sell direct to consumers through pick-your-own and in their farm shop. They process fruit and vegetables on site into baked goods and preserves and have a staff team of nearly 70 employees. They receive over 100,000 visitors to their farm annually and have increased revenue over 400% in the 10 years since they took over the family farm. They have a strong focus on sustainable practices as well as educating the general public about agriculture.

NONO SEKHOTO, SOUTH AFRICA – Dimakatso Sekhoto-Iga (Nono) is a commercial farmer, an entrepreneur, an international youth in agriculture advocate and an award winning South African civil society leader, working to empower women and youth farmers across the country and region. Nono began her journey in the agricultural sector in 2011 running a 2,000 hectare mixed farming enterprise in livestock, grain and fruit, managing up to 50 workers. Nono was selected for: Gibs Goldman Sachs Entrepreneurship 10,000 Women programme; Oklahoma State University Agripreneurs Fellows, Frankfurt School of Financial Management and Korea Institute of Development Strategies. Nono's passion for agriculture deepened when she was appointed as a member of the National Executive Council for African Farmers Association of South Africa (AFASA). As AFASA Youth Chairperson, tasked with establishing the youth chapter her tenacity, professionalism and experience in agriculture provided a compelling story for the network of SA's top agribusiness corporates (such as AFGRI, Standard Bank and Corteva Agriscience etc.) to support and engage young farmers in the country via the platforms she created. This also provided Nono first-hand understanding of challenges faced by youth in agriculture. Nono's work has attracted much attention over the years, as she has been invited to speak about her advocacy to improve support for youth in agriculture, nationally and internationally, at platforms such as: TEDexWomen, Nelson Mandela Rhodes Foundation, UN Climate Change Conference (COP25), Brussels Policy Briefing, Donor and Finance Platform (EU), Policy Center for the New South's Atlantic Dialogues and several others.

PEDRO VIGNEAU, ARGENTINA – Fifth-generation farmer from Bolivar in Argentina, he grows crops for fodder, grains, including GM soya, in Central Argentina. He is passionate about the benefits of no-till farming and the use of technology to protect the environment. He is part of the Global Farmer Network.

SIMON WANCKE, SWEDEN – Vice President of CEJA, the European Council of Young Farmers. He does not come from a farming background but studied agriculture and economics at secondary school and holds a university diploma in agriculture and rural management. He currently works as an estate manager on a farm in Sweden with arable crops, beef and dairy cattle and sheep. He also teaches crop production to students. He is the former Vice President of the Federation of Young Swedish Farmers (LRF). He has also worked at the local, national and European level on topics ranging from sustainable production to generational renewal.