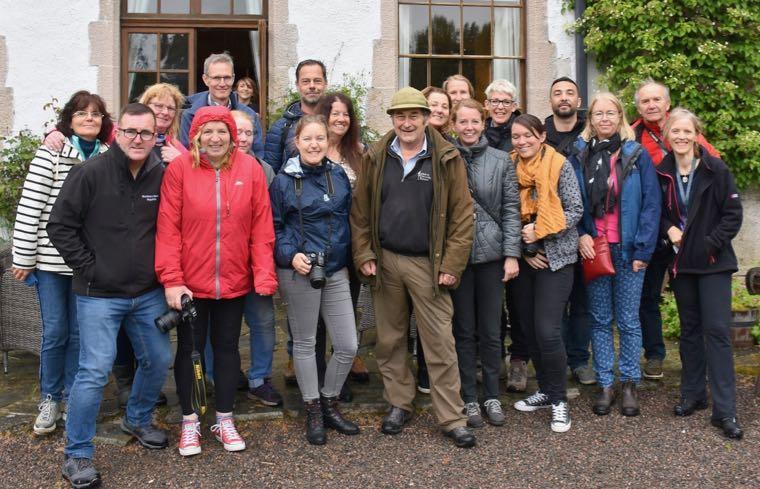 More than 20 journalists from 17 countries visited the Highlands and Islands of Scotland – and left with stomachs full of some of the best food produced by Scottish farmers.

For most of the group this was their first trip to Scotland and the full programme certainly generated plenty of discussion, debate and of course, stories.

The four day tour started and finished off in the Highland capital of Inverness taking in crofts, farms and other agribusinesses along the trail, which also ventured across The Kyle to the Isle of Skye and The Minch to the Isle of Lewis and the Isle of Harris.

Meeting up on the first day in the Palace Hotel, Inverness the group members were introduced to each other during an icebreaker Avva Gin tasting event before being piped into dinner – a delicious three course meal including chicken stuffed with haggis.

"That meal set the bar high for other food to meet and it did," says Chris.

Tuesday saw the group set off with trusty Stagecoach driver Dennis Matthew at the wheel onwards to the arable farm of Mike Martin, who farms with sons Ali and Johnnie at Garguston, Muir of Ord.

Then there was a lunch stopover at Dingwall & Highland Livestock Market where the group heard from sales director and auctioneer Paul Spencer on the vital link the mart plays in farming.

Following a tour of Glen Ord Distillery the group travelled to Alvie Highland Estate in the Cairngorm National Park to stay in the shooting lodge for the night.

Laird of the estate Jamie Williamson gave a tour of the farm and explained how he was also concentrating on ‘farming tourists’ as well as beef and sheep to ensure the business remained profitable.

Next stop was the Isle of Skye and an overnight stay at the Cowshed, where a number of speakers discussed the benefits of crofting followed by another whisky tasting, a succulent barbecue and a ceilidh!

Next morning the group caught an early ferry from Uig on Skye to Tarbert on the Isle of Harris to learn about island farming life.

Onwards to the Isle of Lewis and a fascinating visit to Hebridean Seaweed and a visit to a croft which rears sheep and weaves tweed.

That night was spent in traditional black house village before an early 4am start to catch the ferry from Stornoway to Ullapool.

On way to Inverness the group visited Scott Renwick and his family, who run Luing cattle and North County Cheviot sheep as well as contract gathering, dipping and shearing.

The final visit was to Scottish Sea Farms at Kishorn for an interesting visit to their salmon farms, after a delicious salmon lunch.

Chair of the organising committee Eilidh MacPherson was delighted with the tour and said: “We had participants from Sweden to Georgia and Israel to Belgium on our tour and I think it’s fair to say all of them enjoyed it.

"The weather on Lewis was testing at times but we all got a good feel of how it is to farm in the tough conditions in the Scottish Highlands.”

Chris adds: “This was an excellent opportunity to gain insight into another level of farming in somewhat challenging yet beautiful conditions.

“There is no doubt everyone enjoyed the food, especially in the Renwick kitchen where Scott’s wife Marie served up some delicious home baking with a dram of whisky.”

The tour organisers would like to thank the British Guild of Agricultural Journalists for its support as well as IFAJ and ENAJ and all the sponsors, farmers and others who made the tour the huge success it was.

And lastly, a special word of thanks to Dennis from Stagecoach who became a huge part of the group, not just the driver.