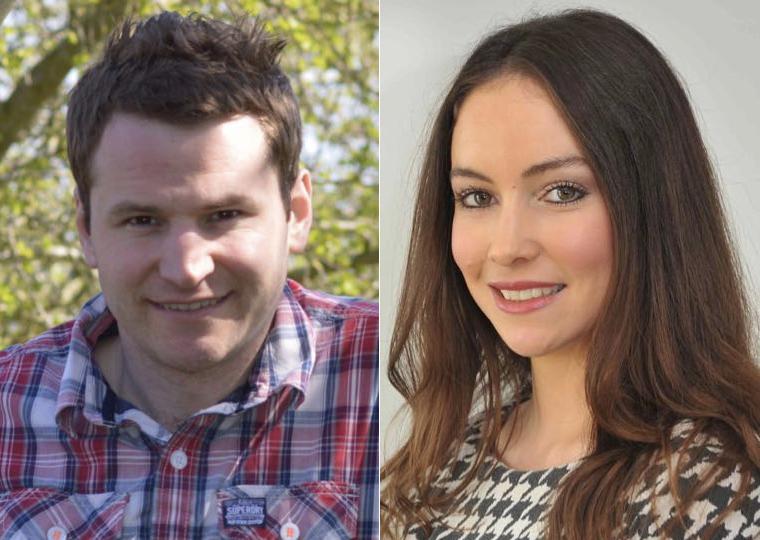 BGAJ members Olivia Midgley and Ben Pike (pictured above) have been elected to the council of the British Guild of Agricultural Journalists.

Olivia and Ben were elected on 14 March at the Guild's 2019 Annual General Meeting at NIAB's Park Farm, Histon, Cambridgeshire.

Olivia is head of news at AgriBriefing, publishers of Farmers Guardian.

After graduating from Sheffield University with a journalism degree, Olivia kicked off her career with stints on local and regional newspapers.

She joined Farmers Guardian's London team in 2011 and worked her way up the ranks to become news and business editor in 2016.

Nominating Olivia as a Guild council member, former Guild chairman Ben Briggs said: “Olivia will bring a wealth of innovative ideas and creativity to the Guild.

“She is one of the leading journalists and section editors within agricultural journalism and has led FG's coverage of crucial issues in a modern, forward thinking way.

“She will bring a lot to the wider organisation and be able to communicate to members old and new how she has used the Guild and the opportunities it has to offer to further her career.”

Ben is owner and director of Eve Communications – a marketing and communications consultancy he founded with his wife Katie.

A graduate with a degree in multimedia journalism from Manchester University, Ben worked for the Bridgwater Mercury before joining the NFU as a web editor in 2007.

Ben went freelance in 2013, specialising in food, farming and rural affairs before setting up Eve Communications in 2016.

Supporting Ben's nomination to Guild council, BGAJ council member Johann Tasker said: “Ben is a respected journalist and agricultural communicator – and will be a great asset to the Guild.

“As a BGAJ member Ben was among 10 international participants selected for the IFAJ-Alltech Young Leaders in Agricultural Journalism award in 2015.

“It is fantastic that he now feels the time is right to put something back into the Guild by becoming a council member. I am pleased to support his nomination.”