Guild member Roger Trewhella attended an EU Council of Agriculture Ministers’ meeting in Bulgaria in early June – thanks to a trip organised by the European Network of Agricultural Journalists.

While George Eustice was on the original list of attendees, he did not  feature on the final roll, writes Roger. As such, this left the UK government unrepresented. As the main thrust of the meeting was the initial discussion about the budget for 2021 to 2027, it is  reasonable to assume that our government does not expect it to have any impact upon this country.

Although only published a few days prior to the meeting, the Budget proposals drew  immediate rejection from six countries opposed to any reduction in total spend led by France with Spain, Greece, Portugal, Finland and Ireland – the latter being Commissioner Hogan’s home country.

The avuncular man-mountain who is Phil Hogan was quite sanguine about the response, claiming that he has done his job; the priority is income protection for smaller farmers, with payments capped at 60,000 euro per year (£50K). This can be increased where high labour employment is created. 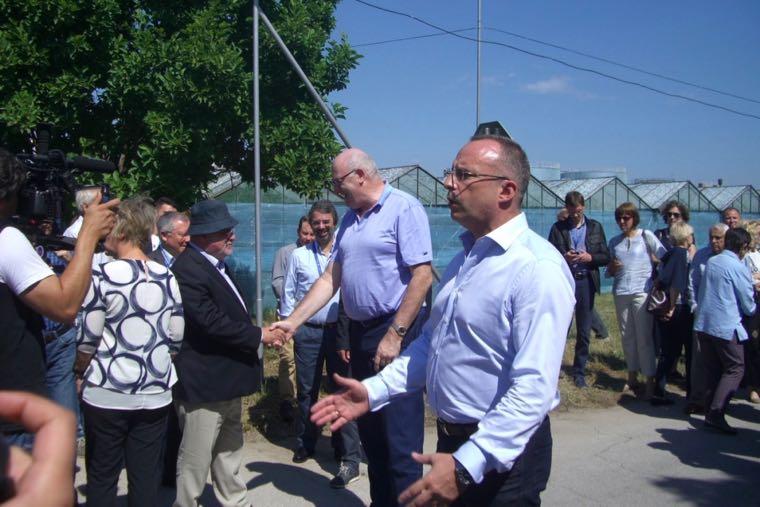 The major concern for Rumen Porodzanov, Bulgaria’s Minister of Agriculture, Food and Forestry, was the on-going exit from livestock farming, leading to land  abandonment in areas unsuited to cropping.

Pekka Pesonen, Secretary-General of Copa-Cogeca, was complimentary toward Mr Hogan’s proposals, especially the income protection. However, making the point  that only two per cent of EU farms can be described as industrial, the Copa view is that capping will only lead to the splitting-up of larger holdings. As for the UK, all reports  indicate that the decision to cap has been made, even though we have larger farm structures than the EU average.

When questioned about the potential impact of an EU Free Trade Agreement (FTA)  with the Mercosur countries of South America, Mr Pesonen pointed out that negotiations started in 2004, and while progress has been made he was content to be quoted that it will be  another 14 years before conclusion.

The lesson for the UK is that quick FTAs are a rarity.

On the internal Irish border, Mr Pesonen was clear. Copa-Cogeca backs Monsieur Barnier. Any breach of the ringfenced external boundary would destroy the Single Market. A  precedent set in Ireland would lead to a similar request from Switzerland, and where next?

Mr Pesonen was well versed in the history of Ireland and significance of agriculture in its history – even to the extent of meeting the late Martin McGuiness to ensure he had the widest overview. Mr Pesonen echoed Commissioner Hogan’s words in so far as the UK cannot achieve all its red lines.

If the UK continues on its current course, then Europe will experience an unprecedented situation around security of supply, in Mr Pesonen’s opinion. He made the chilling comment that this could result in a major political event somewhere across the continent.

Reflecting on these words, it is easy to remember the difficulties and delays in implementation encountered when a UK supermarket agreed a new supply contract, following tendering of its liquid milk supply business. Mr Pesonen is anything but hot-headed and volatile; he was thoughtful and considered and, correctly, explained that supplies of food cannot be turned on and off like a tap.

For over three hundred years Bulgaria has been a leading source of the highest quality ‘essential oils’ which enhance health and beauty therapy. Since the end of the communist era the area planted to crops including roses, lavender, camomile, balm and more has expanded ten-fold.

While Bulgaria grows more lavender than any other country in the world, it is in rose oil where it excels. Its world-renowned Rose Valley lies to the south of the Balkan Mountain range, which act as a shield from the chill winter weather blown-in from Russia and Ukraine.

In addition to EU PGI (Protected Geographic Indicator) status, an ISO international standard ensures that only the Damscena Rose variety qualifies the Bulgarian production for  the premium world market. 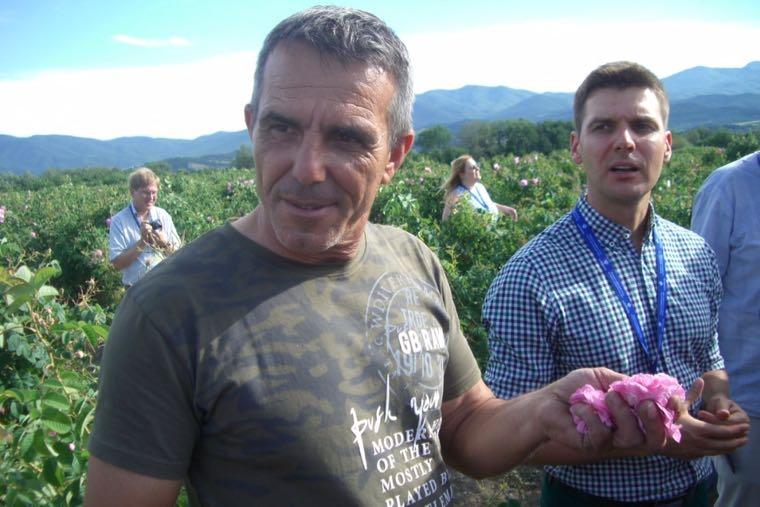 Above: The ENAJ group in a rose field

Land and plants are being managed to organic standards. The Stefanov brothers have gone further at their Intermed 1 enterprise.

Half of their crop is grown under the biodynamic principles espoused by Rudolf Steiner, the Austrian philosopher. This is the same Steiner who founded the liberal educational schools. Steiner’s ideas view the farm  as a single organism where cultivations are carried-out in harmony with cycles of the moon  and planets.

After harvesting the roses at Intermed 1 are double-distilled, which requires eight  tonnes of petals to yield just one kilogramme of rose oil.