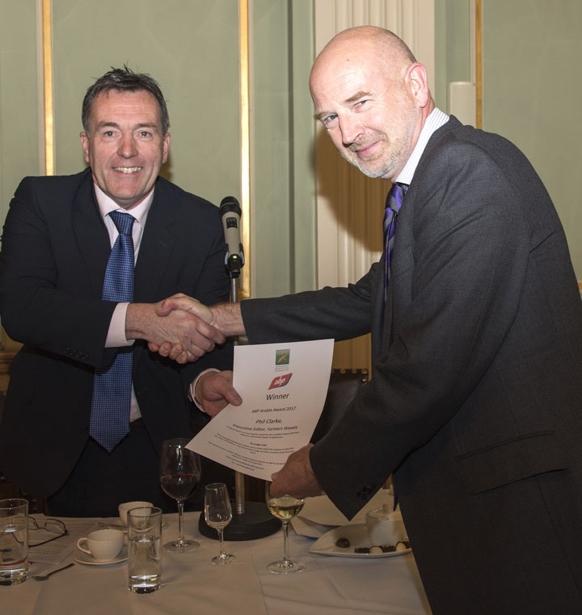 Winners of the 2017 ABP Agricultural Journalism Awards were announced at the Guild's Harvest Lunch.

There are three award categories: Arable; Livestock and Grassland; and Environment and Rural.

Phil won for his Farmers Weekly article entitled "Chemical reaction" – a piece that explored the controversy around the reauthorisation of glyphosate.

He is pictured (right) receiving the award from George Mullan of ABP at the 2017 Harvest Lunch.

Judges said the campaigning feature "successfully rallied the industry to have their say, was well written, and contained a range of views concisely aired."

Runner-up was Louise Impey for her article, also published by Farmers Weekly.

Louise's article was called "Monitor Farms outline key tips for cost saving" which contained a wealth of practical tips from a number of successful farm businesses.

Rhian Price was the clear winner of the Livestock and Grassland category for her piece called "A cut above", published in Farmers Weekly.

Judges said: “This fact-packed feature spelt out what a switch in silage-making approach could bring. A well-structured and researched article.”

Olivia Cooper was runner up for her piece, also in Farmers Weekly on the control of digital dermatitis in cattle without formalin.

Olivia's piece was described by judges as a “A valuable piece of practical editorial to tackle the common problem of digital dermatitis; technical, interesting and a great example of effective knowledge transfer.”

Laura Bowyer of Farmers Guardian was commended for her piece on salt marsh lamb with a strong environmental angle. “Laura weaves in the story of place and family beautifully.”

Emily Scaife won the 2017 ABP Environment and Rural Journalism Award for her "Beyond the Farmgate" piece in Farmers Guardian.

A touching story about a farmer, cancer and his journey, judges said it was "sensitively written, with a powerful call to action on the importance of the warning signs of ill-health".

Ben Pike was runner up for his Farmers Weekly piece on the Community Infrastructure Levy and its effect on farm development projects.

Judges said it was a “complicated subject well told, with a range of experts giving clear views and guidance on the issue.”