Winners unveiled for 2008 Perkins Power on the Farm Award

Stunning views from one of London’s most famous landmark buildings, officially 30 St Mary Axe but commonly known as 'the gherkin', thrilled Guild members gathered for the presentation of the 2008 'Power on the Farm' award sponsored by Perkins Engines. 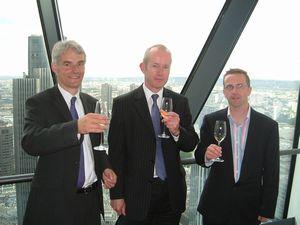 "The 'Power on the Farm' award continues to be an opportunity to recognise and reward the best in agricultural journalism," said Steven Smith, director of sales to agricultural vehicle manufacturers. "Over the years, the entries have tackled many of the subjects pertinent to the industry and this year's crop was no different."

The judges, who had the difficult task of deciding who would carry off the title of farming's sharpest scribe, were former Perkins off-highway sales director John Baxter, who provides some critical continuity having judged the award for the past four years; last year’s winner Mike Green; and Guild chairman Joe Watson. 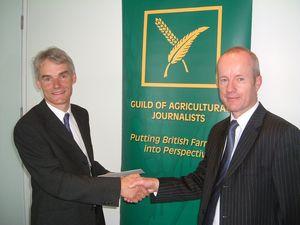 They had a more than usually difficult task in reaching their verdict such was the diversity of subject matter of this year's entries. They included topics from the strategic implications of climate change through to hands-on technical analyses of equipment.

However, the judges concluded that an article in Farmers Weekly by machinery editor David Cousins was a worthy winner; he is pictured (left) receiving his prize from Steven Smith of sponsor Perkins Engines Co.

"The simplicity, concise style and a touch of humour pulled us all into the compelling narrative of 'A Day in the Life of a Combine Mechanic'," said the judges. "The author’s lightness of touch provided the perfect foil for the necessary technical and chronological details to produce a cohesive, informative and entertaining piece... in the best traditions of this long standing award." 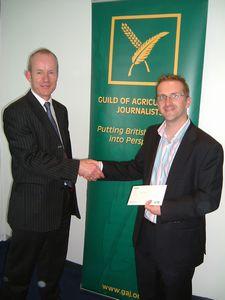 After receiving his £2000 first prize, David commented: "I'm delighted to win this award which celebrates good writing and is an incentive for us all to improve the quality of our work, especially at a time when journalists are under pressure to turn out ever greater quantities of articles and other material."

The winner of the £1000 runner-up prize, Mike Abram, deputy editor of Crops magazine, was complimented by the judges for a "crisp and business-like" article on the energy crop willow coppice and its processing. They described it as useful to participants in the sector but with the "readability" to give insight to a much wider audience.