Winners unveiled for 2010 Perkins Power on the Farm Award

The opulent surroundings of The Ritz hotel in London was the magnificent venue for the presentation of the Guild’s Perkins Engines sponsored Power on the Farm award.

In his introduction, Nigel Baseley, marketing director, reiterated Perkins support of the Guild: "Perkins Engines continues to be a proud sponsor of this award, maintaining that important association with an industry with which the company has become synonymous over the years," he said. "The Power on the Farm award is an opportunity to recognise and reward the best in agricultural journalism." 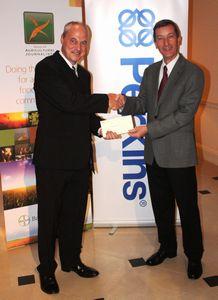 An article on different strategies for saving fuel – from cultivation techniques requiring fewer passes to exploiting the power characteristics of modern tractor diesel engines - was judged the winning entry.

Written by freelance Peter Hill (pictured right with Nigel Baseley) and published in the monthly Classic Tractor, edited by fellow Guild member Rory Day, the article was "relevant to all farmers and loaded with information," said the judges.

"This fact-packed article was a pleasure to read and easy to recall; it engaged the reader from the start and, being written at a time of near record fuel costs, the article's relevance and usefulness are unquestioned," they added.

"The reader is both informed and challenged to select and apply the many techniques described. Combining huge scope with closely written rationale, this article is a worthy winner in the best tradition of the Perkins Power Award." 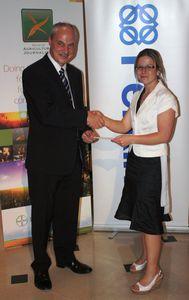 The runner-up prize was secured by Emily Padfield, deputy machinery editor on Farmers Weekly, for an article on telematics, the electronic systems that are increasingly used on combine harvesters to remotely monitor and record field performance and which allow remote adjustment of machine settings.

Award judges Rachael Porter (the 2009 winner), former Perkins agricultural sales director John Baxter and Guild chairman Nick Bond said of Emily’s entry: "The author presented a highly readable guide to the capabilities of telematics and by avoiding jargon and emphasising features, the article packed a lot of information into a succinct guide, with just enough technical depth to be convincing.

"If the article had balanced users' experience with manufacturers' claims, it may have made top spot: nonetheless the informative and engaging style, dealing with this difficult topic, ensured the well merited runner up prize."

Nigel Baseley applauded the Guild and the work of its members in communicating information to the farming industry, a sentiment echoed by Guild president Lord Cameron of Dillington, who thanked the Perkins Engines marketing team for the valued support of the award. 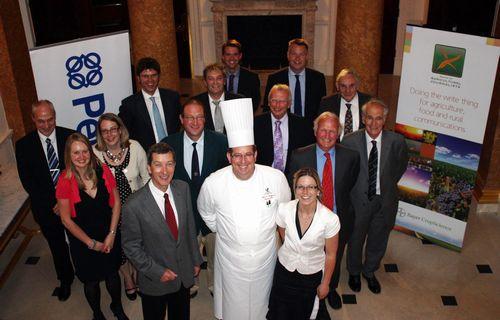