To all Guild Members and Friends – wishing you an enjoyable Christmas and a New Year that brings good health and fortune. 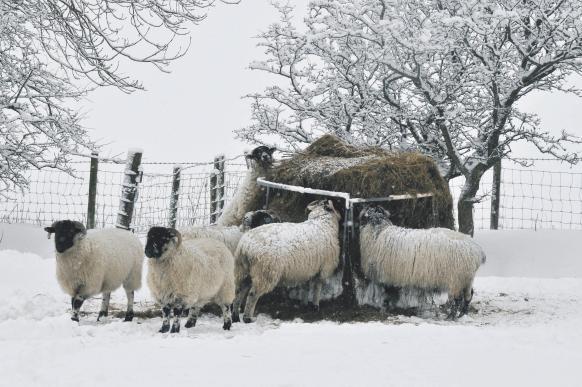 With thanks to Guild member Theresa Eveson for the seasonal image.

Guild members writing about livestock health and welfare issues have until the end of December to enter the Guild’s journalism award sponsored by industry body NOAH. News and feature material is eligible – see examples of previous winners on the website where entry details are also given. Editors – remember you can enter staff or freelance contributions; either way, the final deadline is Monday, December 31. Entry details here.

The Guild's management Council is to trial teleconferencing in January to cut meeting costs and allow more frequent decision-making discussions when necessary. At present, the Council of 11 elected representatives of Guild members meets four times a year at The Farmers Club in London. When possible, meetings now start later than they used to and run on into the afternoon so that off-peak rail fares can be used if possible.

"Despite this measure and a reduction in the number of Council members, it still costs between £750 and £900 to reimburse travel costs for members who travel from the north of Scotland and the length and breadth of England to attend meetings," notes Tim Price, treasurer. "If we can successfully conduct Guild business through virtual meetings a couple of times a year, teleconferencing will make quite a saving, even after we've paid for the online service."

The annual inflation-related increase in Guild subscriptions takes the rate to £68 for 2013, members qualifying for the retired subscription paying just £1 more at £34. The increase is just below the 3.2% retail price index figure for October. Subscriptions will be collected as usual by direct debit in February.

Two key dates to include in diaries for 2013: the annual meeting will be held on Thursday, March 14 at a venue to be announced but an interesting and worthwhile format is promised.

The annual Harvest Service and Harvest Lunch will be held in London on Thursday, October 10. New caterers will be appointed this year; talks have started with a charity that develops young peoples' skills through food and cookery education. But Guild members with alternative contacts or recommendations are welcome to make them known to the chairman, Adrian Bell.

Guild member Clive Rainbird, freelance communications specialist and former Bayer CropScience PR and marketing communications manager, was co-opted to the Guild's management Council at its December meeting. He fills the place vacated by south Wales publisher Mike Donovan, who said: “It has been a pleasure and privilege to work with Council members on various projects, and I will continue to champion the Guild in my daily work.”

Clive and fellow Council representatives enjoyed Christmas Lunch afterwards (at their own expense) and heard from guest George Freeman, MP for mid-Norfolk, about plans for the government's new agricultural science and technology strategy. Mr Freeman, who has a farming background and is the government's Life Science adviser, pledged support for IFAJ Congress 2014. The Guild is hosting this event to showcase the best of British innovation in agriculture, food and drink.

An article on a young farmer in Germany who uses vending machines to sell asparagus was a prize winning entry in the inaugural journalism awards organised by the new European Network of Agricultural Journalists (ENAJ).

Written by Andrea Bahrenberg of the German farmers' organisation DLV, the article on the enterprising asparagus grower won the ‘young farmers starting a new business’ category. The category for another CAP theme – environmentally sustainable farming – went to Rica Hennings, also of Germany, for an explanation of commercial timber harvesting and conservation in Schleswig-Holstein.

The awards have been set up to reward journalists under the age of 35 working in agriculture in any one of the 17 member countries of ENAJ. They were promoted to British Guild members in a June 2012 eAlert.

“All the entries were of an extremely high standard,” says Katharina Seuser, ENAJ vice-chairman and award co-ordinator. “It's hugely reassuring to know that the future of agricultural journalism and communication in Europe is in safe hands as this new generation of journalists matures and hones their skill."

Update the Guild Year Book with the new job, location and contact details noted here, as well as any new member listings below. Earlier updates can be found in the eAlerts Archive section of the Guild website.

New Friend of the Guild:

In 2013, Guild members can take part in an unprecedented visit to Argentina by signing up for the IFAJ Congress being held for the first time in South America. The country has some amazing stories to tell about the scale and rapid expansion of its agricultural industry and related rural enterprises, which Guild members can experience in the company of up to 200 fellow journalists from around the World. More details here.

Two official delegates will be attending the Argentina Congress from the Guild to participate in the meetings, discussion and visits programme but also to launch the IFAJ Congress 2014 being held in Great Britain. Find out more about what is being planned and how individual Guild members can get involved in preparations for this major event here.