Entries for the Guild's Power on the Farm Award generously sponsored by Perkins Engines Co Ltd must be submitted to organiser Claire King by close of play tomorrow - Friday, June 20.

Full details of articles that would qualify for the award - and the potential to win the £2000 first prize or £1000 runner-up prize - are available by clicking the image and opening as a PDF.

Applications have opened for this year's Exposure-4-Development tour to Africa - a journalists' study trip to Tanzania.

Organised on behalf of AgriCord, the alliance of national agricultural agencies in association with the International Federation of Agricultural Journalists (IFAJ), the tour begins upon arrival at Kilimanjaro International Airport in northern Tanzania.

There, you will meet up with 14 other agri journalist participants from around the World and local experts who will take you to hotspots where production and financial initiatives have been developed to improve the economic situation of farmers.

Dairy, fruit, vegetable, tobacco, coffee and fish production are on the agenda, visiting producers, processors, markets, organisations and government representatives - as well as some of the scenic delights of the Tanzanian countryside.

Two Members of the British Guild have been selected for these tours in previous years - Chris McCullough of Northern Ireland publication Farm Week went to Kenya in 2012 and Uganda in 2013, and smallholding specialist Liz Wright also  visited Uganda on last year's E4D tour - and was enthralled by the experience.

Both reported extensively in their publications and recounted their experiences in reports for the Guild website - use the name links to find out what they got out of the tours.

The fee for taking part if selected is just €300 (£240) and includes all food, travel and accommodation once in Tanzania; airfares from the UK are about £600. 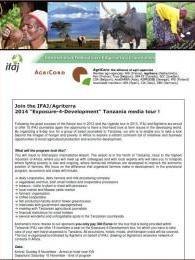 Candidates must produce a publication plan to show commitment to reporting stories from the tour and must share their experiences with fellow Guild members through a website report.

The application form must be sent to Guild secretary Nikki Robertson no later than Monday, June 30. The Guild will submit two candidates to the main organiser, Dutch agri development organisation Agriterra, for the final selection.