A new Yearbook compiled and produced on behalf of the Guild should now be in the hands of all Members and Friends.

The Yearbook was edited by Guild Council Member Johann Tasker, with listings compiled by Peter Hill using the Guild's Farming Media Centre. It was printed and published by Countrywide Publications.

Johann said: "I'd like to thank contributors to the Yearbook and, in particular, the advertisers who supported this much valued membership benefit." 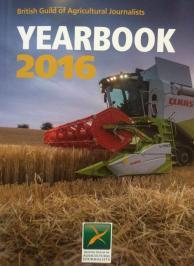 In addition to the usual membership listing, which many people value as a source of contact information both in the office and when on the move, the 2016 edition contains articles describing the main events, awards, training and travel opportunities available exclusively through the Guild and the European and International organisations for rural communicators.

Caroline Stocks, a freelance Member, commented: "Great job on the Guild Yearbook - it looks fantastic and all the articles in it were a good read!" Amy Jackson of Oxtale said on Twitter: "Loving the new-look @gajinfo yearbook - funky new style, great content."

Members and Friends of the Guild can update their listings for the next edition - and for the Guild's online Farming Media Centre - at any time via the Guild website; see 'Member contacts update' item below.

If you have not received your copy, please email johann@ruralcity.co.uk.

There will be at least one vacancy on the Guild's management Council to fill at this year's annual meeting, since Adrian Bell has chosen to step down having taken on the Treasurer's role at the International Federation of Agricultural Journalists (IFAJ).

Any Member of the Guild can put their name forward (to the secretary, Nikki Robertson, supported by an endorsement from another Member) to join Ben Briggs (chairman), Olivia Cooper, Jane Craigie, Jamie Day, Simon Haley, Louise Impey, Catherine Linch (deputy chairman), Julie Mate, Clive Rainbird and Johann Tasker as a director of the Guild representing members' interests and helping steer the organisation through its many activities.

Adrian has made an enormous contribution over several years; he conceived and put into place the Farming Media Centre, providing the first means of contacting Members and Friends of the Guild online; instigated the name change to introduce 'British' into the Guild's title; and managed the transition to the Guild's current legal status, which involved drawing up a new constitution and rules.

Also, he has represented the Guild at both ENAJ, the European Network of Agricultural Journalists, and more recently the IFAJ while encouraging Members to take up the travel and personal development opportunities available through the Guild's affiliation to both organisations.

In addition, Adrian has helped judge a number of Guild awards and is one of the most diligent and eagle-eyed proof readers anyone could wish for!

Adrian continues to represent the Guild at ENAJ, as this is not an official Council role, but relinquishes his place on the IFAJ executive committee. His successor will be elected along with other roles on Council at its first meeting after the AGM.

This month saw the Guild's inaugural President's Event, held at the House of Lords on Monday, 12 January. Hosted by Guild President Lord Curry of Kirkharle and kindly sponsored by Perkins, the event combined a panel style debate followed by a networking reception.

The President's Event is an excellent way of raising the profile of the Guild with industry leaders, politicians and other decision-makers and opinion-formers. We hope similar events in future become a regular fixture in the Guild calendar.

The 2016 New Year's Honours list included a well-deserved British Empire Medal for Guild Member Alan Stennett, for services to farming and broadcasting in Lincolnshire. The author of numerous books, Alan presents the weekly farming programme on BBC Radio Lincolnshire - and has done so for the past 30 years.

Annual membership subscriptions for 2016 will start to be collected by the Guild's SmartDebit system on February 16 at the same rates as last year - £72 for Members and Friends, £36 for Retired Members and Student Friends. A receipt will be issued by email.

To invite colleagues and industry contacts to consider joining the Guild, point them to the website page here, where the benefits are set out and a leaflet is available to download. There is also a link to online membership application and subscription Direct Debit forms. Subscription rates for 2016 are unchanged from last year at £72 for Members and Friends, £36 for Retired Members and Student Friends.

The Guild is delighted to welcome the following new Members:

But we say goodbye to…

Also, freelance Fordyce Maxwell, who says: “I have many good memories of guild membership and colleagues, but being way past retirement age it's time to leave it to the youngsters.” And sugar beet expert Mike May: “I have enjoyed my time as a member and during my work with Evington-Morris have met many members of the Guild who have been both friendly and helpful.”

Vacant positions are mentioned in Guild eAlerts as a service to members but a recruitment advertising service is also available to organisations keen to attract talent from among the ranks of the Guild membership involved in journalism and commercial communications. More details about this service are available on the website or can be obtained by contacting Peter Hill.

Updates on new job, location and contact details. Earlier updates can be found in the eAlerts Archive section of the Guild website accessed via the Member Communications tab.

Joint editor of Prof International, Mervyn Bailey, has moved back to his native Ireland from where he maintains his role on the monthly machinery magazine. Mervyn’s email address is unchanged but he has a new mobile number: +353 87 683 5472

An incorrect email address was listed in the new Yearbook for Harry Hope, a retired Member of the Guild and former Farmers Weekly journalist. Harry shares enidhope@virginmedia.com with his wife.

Agronomy specialist Lucy de la Pasture has joined Crop Production Magazine (CPM) as technical editor and is now the key contact regarding technical articles and the publication’s new root crops section specialising in sugar beet and potatoes. Lucy can be reached using the email address lucy@cpm-magazine.co.uk and on mobile 07977 576733.

Freelance journalist Caroline Stocks has moved (albeit not far) so the postal address for Caroline Stocks Communications is now: 3 Larkspur Close, Stenson Fields, Derbyshire DE24 3FT DE24 3FN. She also has a subtly different email address from the one in the Year Book: caroline@carolinestocks.co.uk

Tracey Wathen-Jones, a Friend of the Guild, has a new postal address but other contact details remain as in the latest Year Book: 57 Broadchalke Down, Badger Farm, Winchester, Hants SO22 4LR.

Members and Friends of the Guild - you can change your contact details and information about any services you provide by updating membership profiles on the Guild website. This will ensure up to date details are displayed on the Farming Media Centre web page and in the next edition of the Yearbook. If you have not previously logged in to the website, follow the instructions available here.

The Dates & Deadlines panel on the home page gives Guild event details and award application deadlines, as well as access to the full listing of Guild activities through the year.

The Guild Facebook page includes updates and photos of interest to Guild Members, including Guild-related news from other websites. To take a look, visit www.facebook.com/GAJinfo.

What the trust can do for you – or someone you know

The Guild’s Charitable Trust was set up to help Members of the Guild – of any age – and their partners and families when faced with difficulties or hardship.

The Trustees offer confidential practical support and advice, and have funds available to meet short-term needs (such as urgent utility bills in times of financial difficulty) or to help enhance standards of care and treatment in times of ill health or old age.

Members of the Guild who think the trust could help – or who know of fellow Members who could benefit – should contact the chairman of Trustees, Stephen Howe on 01342 893018 or email.

What you can do for the trust

The financial help that Trustees can offer is determined by annual income from investments, donations and fund-raising initiatives such as the Harvest Lunch prize draw. The 200 Club is an easy and painless way to make an annual donation: shares are just £10 each and subscribers have two chances a year to win up to £250 in cash prizes.

Members and Friends who take part in a charitable fund-raising event – please consider donating some of the funds you raise to your own Charitable Trust; and be sure to let us know what you’re doing so we can encourage support for your efforts from among the Guild membership.

More information on all aspects of the Charitable Trust is available on the Guild website.

Contact Guild secretary Nikki Robertson if you wish to: Apply for Retired Member status to pay the reduced subscription Apply to become a Member of the Guild as a Friend who now qualifies for membership Notify a change of bank details for the subscription Direct Debit Notify a change of home or work postal address, telephone numbers or email address Notify that you are resigning from the Guild