Guild at the Royal Highland Show

Scottish members of the Guild have again arranged a press party at the Royal Highland Show for Members and Friends of the Guild and other journalists and photographers working at the show. It will be held on the first day, Thursday, June 20 from 6pm to 8pm in the function room next to the press centre in the Highland Hall. 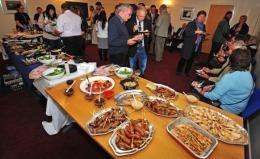 Eddie Gillanders, editor of Farm North-East, has arranged a sumptuous repast of good Scottish food and drink: "I'm very grateful to Scotland's red meat promotional body, Quality Meat Scotland (QMS), who have kindly stepped in as main food sponsor," he says. "Other generous sponsors include McDonalds (wine), Morrisons (beer and soft drinks), Mackies (ice cream and crisps), First Milk (cheese) and, of course, the Royal Highland and Agricultural Society of Scotland who provide the facility and pick up the tab for the show caterers, Saltire, who provide tablecloths, crockery, cutlery and staff to serve the food and drink."

As a further incentive to attend, Eddie notes that a bottle of Scapa whisky from Orkney, handed into the press room at a recent bull sale at Stirling by one Ronnie Sabison, remains unopened and will be available for sampling on the night…….

"The party is much enjoyed and appreciated after a hard working day at the show and all working journalists are welcome," says Joe Watson. "But please ask Eddie first if you wish to bring along a guest."

Don’t forget to note the dates of other Guild events being held this year – early evening receptions at the Livestock Show and the Royal Welsh Show in July; and the Harvest Service and Harvest Lunch in October. See Dates & Deadlines on the Guild website home page for details.

A tweet and news item mentioning Farm Africa's involvement in the Thames Path Challenge has prompted the charity to call on Members and Friends of the Guild to also give it a go. So, is anyone willing to organise a Guild team to walk a section of the Thames from London to support the Charitable Trust and Farm Africa? It's on the weekend of September 14/15 and is 'home territory' for Farmers Weekly staff..... More info here.

A new edition of the much-valued Guild Year Book has been published by Wendy and Peter Ryder of Lancer PR, providing a detailed listing of Members and Friends, which many find invaluable for providing telephone numbers and email addresses close at hand.

This year’s edition has a section on the forthcoming IFAJ Congress 2014 in Scotland, an expanded Guild awards section, and information on the Guild Charitable Trust and its excellent work supporting those who find themselves in difficulty. Any Member or Friend who has not received a copy should contact Wendy Ryder.

Members of the Guild who are 35 years old or less at the end of this year can apply to attend the preview press conference of the Agritechnica show as part of a young agricultural journalists’ press event organised by the European Network of Agricultural Journalists (ENAJ).

One Member representing the British Guild will be allocated the all-expenses paid place to join 17 fellow young journalists from ENAJ member countries. Agritechnica is the world’s biggest exhibition of farm machinery, equipment and technology; the pre-show briefing is attended by exhibitors to highlight the new products they will launch at the event.

Members who would like to be considered for this place should apply to the Guild's ENAJ representative Adrian Bell by Sunday, June 30.

Although the Guild no longer issues membership cards, Members who would find it useful to carry identification as a media representative can apply for an IFAJ Press Card, which is recognised by agricultural institutes, governments, ministries, exhibitions, fairs and events all over the world.

“Not everyone will need it for things such as EU press accreditation,” notes Adrian Bell, the Guild’s representative at the European Network of Agricultural Journalists (ENAJ). “But it's useful nevertheless – I’ve used it as an extra form of ID while on my European travels, including access to the Reichstag in Berlin when I didn't have my passport on me.”

The IFAJ Press Card costs €15 – more details on the Guild website here. Journalist Members of the Guild on regional or local newspapers may also qualify for a UK Press Card from the Newspaper Society – details here.

Congratulations also to the winners of two new Guild journalism awards, and the arable photography awards, presented at a well-attended Bangers'n'Beer gathering during the Cereals Event - see a report and pictures here.

To maintain the suspense just a little longer, use the following links to find out who won the awards from the Institution of Agricultural Engineers (IAgrE), the British Society of Plant Breeders (BSPB), and Safagrow, sponsor of the Arable photography awards category - scroll down beyond the Livestock category, the winners of which will be announced at the Guild's Royal Welsh Show reception.

Because many Members of the Guild were occupied last week at the Cereals Event, the deadline for entries to the Guild’s prestigious Perkins Power on the Farm award has been extended to the end of this week – Friday, June 21. Go here to make your submission.

A reminder that Sunday, June 30 is the deadline for the Guild's new £1500 travel bursary to report on innovative approaches to the use of forage crops in other countries. This is a great opportunity for a freelance or staff journalist to get funding for one or more in-depth feature articles and get some experience of livestock farming overseas. Full details here.

Work continues populating the Guild’s new Farming Media Centre ready for launch. It will give more details of the skills and interests of Members and of any services they provide, and include a comprehensive directory of farming and rural publications for the first time.

To do it justice, the online facility needs a new logo to give it a clear identity – but as website editor Peter Hill lacks any artistic talent whatsoever, he needs the skills of a fellow Guild member to come up with something eye-catching! The creative talents of whoever produces the new logo and artwork will be fully acknowledged so there's a publicity opportunity here, too. Ideas, please…… 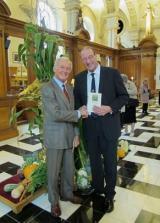 Guild members who would like to make a personal contribution to the Guild’s popular Harvest Service are invited by organiser and choir sponsor Howard Venters of Shepherd Publishing to compose a reading for the service. In the past two years, freelancers Claire Powell and Peter Grimshaw (pictured) took up the offer – their their submissions can be read here – and Howard would like to repeat this new feature of the fabulous service.

“I think it was a really nice touch to have this personal contribution to the service from a Guild member,” he says. “I’d also be delighted if the member who composes the chosen reading would also deliver it on the day, but that’s not a condition for sending one in.”

The service is being held at St Brides Church, Fleet Street, London on Thursday, October 10followed by the annual Harvest Lunch at Stationers Hall.

The publisher of Farmers Guide is looking for someone to convert submitted copy to house style. The work will be home-based and occasional, to help the full time editors.

Cambridge-based PR agency Ware Anthony Rust wants to make a new appointment to its experienced team handling food and agricultural public and media relations. The role is predominantly PR based so the successful candidate will need excellent all-round communication skills and be comfortable speaking to internal stakeholders, journalists, media owners, suppliers and clients.

Acquisitions and mergers agency Matrix Mergers of York is advertising a bi-monthly country and farming magazine for readers in the south-west comprising farmers, smallholders, gardeners and country-loving people. Turnover is billed as £65,000 with 90% repeat advertisers in the 18,000 free copies distributed. Guide price is £75K.

Update the Guild Year Book with the new job, location and contact details, as well as any new Members and Friends noted below. Earlier updates can be found in the eAlerts Archive section of the Guild website.

FG and FW go digital on the move

Contact the Guild secretary Nikki Robertson if you wish to:

Apply for Retired Member status to pay the reduced subscription

Notify that you are resigning from the Guild