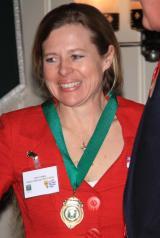 Members at the annual meeting elected Jane Craigie as new chairman of the Guild. An avid enthusiast for what the Guild represents, Jane is a PR and marketing communications specialist whose home office is at Netherdale near Turriff in Aberdeenshire. After accepting the medal of office from Guild president, Lord Cameron, Jane thanked Members for entrusting her with this role and urged them to support the Guild management council, in particular with preparations for the IFAJ Congress 2014. Read about Jane’s goals for her two years in office in News on the Guild website.

Snippets from the annual meeting

Members approved two important proposals from Council at the annual meeting, saw the result of the Guild’s first online election of Council members and heard more about plans for the IFAJ Congress 2014 event.

The event was held in the splendid New Armouries conference centre of the Tower of London thanks to generous sponsorship from Massey Ferguson. A detailed record of the discussions and proceedings is available in the Minutes here, together with a review of the Guild year here.

A proposal by Council that the Guild become a company limited by Guarantee was approved after treasurer Tim Price set out the reasons for the move – see his report here. Establishing a legal status for the Guild will enable improved banking facilities, including online account and direct debit management, and credit or debit card payment for event tickets. It will also protect Guild council members from personal financial liability. The Guild is very grateful for the support of William Neville of Burges Salmon and Alick Jones from Lloyds  TSB in defining the most suitable course of action. Both have given of their time freely to support the Guild.

After discussion of several proposed amendments, Members also approved a new Constitution to define the Guild and a set of rules by which it should be run. An amendment that would retain the term 'council members' instead of the proposed new description 'director' was approved by a show of hands but an amendment to restore voting rights to Members with Retired status was rejected. The meeting also decided that Senior Fellows of the Guild can continue to attend all Council meetings - the new Constitution proposed they could do so only in rotation. 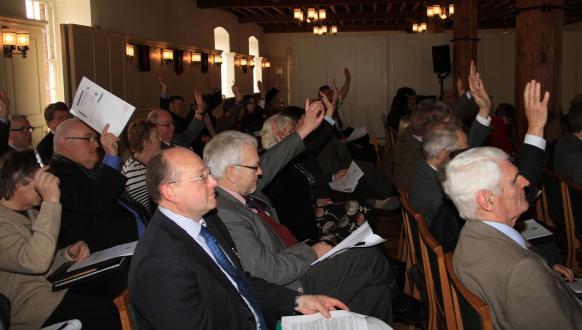 A third of Members took the opportunity to vote online for the first time to elect members of the management council. Of the six candidates willing to help run the Guild and its activities, the five available places were filled by Ben Briggs, Farmers Guardian journalist; Peter Hill, machinery freelance; Clive Rainbird and Liz Snaith, both PR communications specialists; and Joe Watson, Press & Journal agriculture editor.

Archdeacon David Meara, who conducts the Guild’s popular harvest service at St Brides Church, London in October, was re-elected as Guild chaplain and Lord Cameron agreed to continue as president for at least another year. The appointment of auditors was placed in the council’s hands pending the formation of the Guild as a company limited by guarantee.

Events secretary Howard Venters (right) revealed two possible additions to the Guild’s programme of events – lunch at the Great Yorkshire Show in July and a drinks reception at the East of England/Royal Smithfield event in early December. A Christmas Carol service at St Brides followed by refreshments, and a summer evening musical social have also been mooted; further ideas and suggestions to Howard, please. Confirmed events are listed in the Dates & Deadlines column on the Guild website home page.

In its 21st year, the Guild’s Charitable Trust would like a young Member or Friend of the Guild to take over the fund-raising 200 Club. All it entails is administering applications for shares and running the number selection software for the cash prize draw twice a year. Contact new Trust secretary Max Reader to volunteer. Lucky winners from the AGM draw are: Bill Howatson (£250), Wendy Ryder (£100), Grieve Carson (£50) and Colin Jackson (£50).

Adrian Bell completed his two-year term as chairman of the Guild with a report that highlighted the extensive opportunities arising from being a Member or Friend of Guild through the expanding events, travel and awards programmes. Adrian has contributed enormously during his time in office, initiating with others the new venue and format for the Harvest Lunch, drawing up the new Constitution and bylaws, and helping establish the new European Network of Agricultural Journalists (ENAJ), which has already provided unique travel and story opportunities for members interested in European agricultural politics. As Guild president Ewen Cameron commented: “Adrian has fulfilled his term extremely well, giving unparalleled effort and commitment. Members of the Guild owe you a huge debt of gratitude.”

With thanks to freelance photographer Kevin Milner for the images.

Discounted fees for Argentina’s international congress for Members and Friends of the Guild and their counterparts around the World have been extended to Friday, April 19. The £385 fee includes all transportation and meals once in Argentina; accommodation is available from £64 per night in Buenos Aires and £198 to £330 for the three nights in Rosario.

The programme starting Sunday, September 1 includes a visit to Mataderos at the Buenos Aires Livestock Central Market where ‘gaucho skills’ including ring races and breaking-in are demonstrated alongside traditional handicrafts. There is also a Congress study tour to a large orange farm to meet producers and landowners from all over the country.

The event then moves to Rosario, Argentina’s third largest city and main agricultural hub where presentations at the Chambers of Commerce will detail Argentine agriculture, followed by a visit to the Futures Exchange Market (ROFEX). A choice of one-day visits in smaller groups takes in grain, livestock and dairy enterprises.

Partners accompanying delegates are also catered for with city tours of Buenos Aires and Rosario, and a Gala Dinner in Rosario rounds off the event before departures on Thursday, September 5 either home or on a post-Congress tour. Full details on the Congress website or contact Guild chairman Jane Craigie for more information and guidance.

The deadline for entries to one of the Guild's new journalism awards falls at the end of this week. The Institution of Agricultural Engineers (IAgE) is offering a £1000 prize for the article or broadcast on the application of engineering within the land based sector – which encompasses agriculture, horticulture, forestry, amenity and environment. Full details here.

The date of the Guild's visit to BBC Bristol to meet rural affairs editor Jeremy Hayes and his new team has been changed to Tuesday, April 16. The event– which is open to all Guild Members and Friends – is expected to include a tour of the recording studios and starts at 5.45pm. Members in the Midlands region (see Guild Year Book) are urged to attend the annual meeting at 4.45pm. In case of number restrictions, please register intention to attend with Midlands secretary Liz Snaith.

Calling all editors – can you support the Guild’s annual John Deere Journalism Training Award by offering three days’ work experience to one of the course members this summer? If so, organiser Steve Mitchell of ASM Public Relations would like to hear from you – see News on the Guild website for details or contact Steve by phone (024 7630 8912 or 07717 213182) or e-mail.

One place for a Member of the Guild is available on a unique visit to Ireland at the time of the EU agriculture ministers' informal meeting in Dublin, organised by the European Commission's DG Agri and ENAJ, the new European Network of Agricultural Journalists. The Guild's representative delegate will join ENAJ committee member Adrian Bell in a programme of rural enterprise visits and presentations with ministers, participate in the ENAJ general assembly meeting and briefly report their experience to other Guild members via the website.

"It really is a good opportunity to buttonhole either your own minister or someone from another country, to talk to them informally or to conduct an interview," says Adrian. "And I'm sure we'll get to enjoy some good Irish hospitality along the way."

The event is planned for May 26-28; to be considered, apply to Adrian Bell with reasons why you wish to take part - read Gaina Morgan's report from last year's event here.

Guild Members and Friends have until the end of this week to notify Year Book editors Wendy and Peter Ryder of any amendments to their entries for the 2013/14 edition due out in June. Also, anyone not listed in the current Year Book (having joined since it was published last year) should also complete the form to have more than just their name and contact details included.

Update the Guild Year Book with the new job, location and contact details noted here, as well as any new member listings below. Earlier updates can be found in the eAlerts Archive section of the Guild website. If you change jobs, move house, get a new email address or telephone number, please pass all details to the secretary so the Guild can keep in touch.

Maria Limonci has moved her PR operation to 4 Yorke Road, Troon, Ayrshire KA10 6EW. Her telephone number is 01292 317870 but other contact details are unchanged.

The Guild is delighted to welcome the following new Members…..

This month, the Guild says “farewell” to fertiliser markets guru Roger Chesher, who writes: “There comes a time in the affairs of men when it is necessary to bring about change. After a rather unexpected second career in PR and journalism it is finally time to take some rest. Whether well-earned or not I leave it to others to judge. At my back I seem to hear time's winged chariot drawing near and I have so much to do other than work. So please accept my resignation and pass my best wishes on to those who remember me. On to pastures new – but knowing my luck they will probably need a bag or two of Nitram!”

Send in your news...