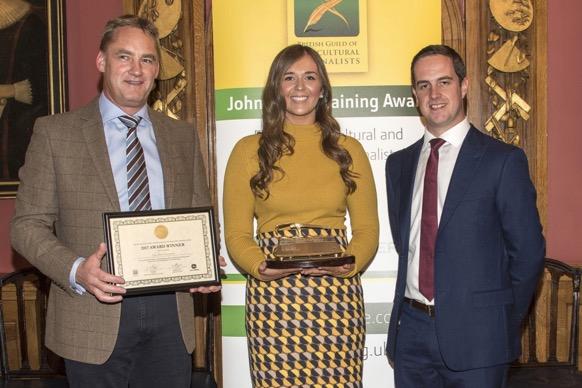 Charlotte has been working since January as an editorial and PR assistant at Agri-hub, the specialist agrimedia network, having joined the business after completing an FdSc in Agricultural Management at Cannington College in Somerset.

For the final award, the 14 course members were asked to write a news story of no more than 500 words on this summer’s ‘24 Hours in Farming’ initiative.

David commented in his summing-up: “The judges agreed that the winning news story, entitled ‘Farm24 bridges the rural isolation gap’, was the strongest entry by far. The article adopted a confident and authoritative tone and was well written.

“By choosing to focus on social media’s role in combating rural isolation, the writer successfully identified a strong news angle from the many activities that took place during the 24 Hours in Farming event.

“The article had a sound structure, was clear and easy to read and was suited to the target audience. The judges were also pleased that the writer approached two different sources for interviews and made very effective use of the quotes she selected for the story.

“As a result, the article met all the requirements of the award brief that the course members had been given. Overall this was an impressive entry.”

Charlotte has received a winner’s cheque from John Deere for £250, and was presented with a framed certificate and the John Deere trophy at the Guild’s Harvest Lunch at Painters’ Hall in London in October.

There was no runner-up this year, as the judges felt the rest of the entries were all of an equally good standard and they did not wish to select one particular piece above any other.

This was the Guild’s 25th John Deere Training Award, which started in 1991.

The course is based on two days of lectures on the basics of writing news and features and interviewing techniques, held at John Deere Limited's UK headquarters in July, followed by three or more days of practical work experience with a range of farming and horticultural journals or communications businesses.

The John Deere Training Award is designed to support the Guild in one of its principal aims - that of promoting schemes for the provision of suitable entrants into agricultural and horticultural journalism.

Since it began, more than 40 course members have found employment as in-house or freelance journalists on national farming and horticultural magazines or websites and with specialist PR companies (not including those already employed when they attended the course).

A copy of Charlotte's winning article