ENAJ trip is success from start to Finnish... 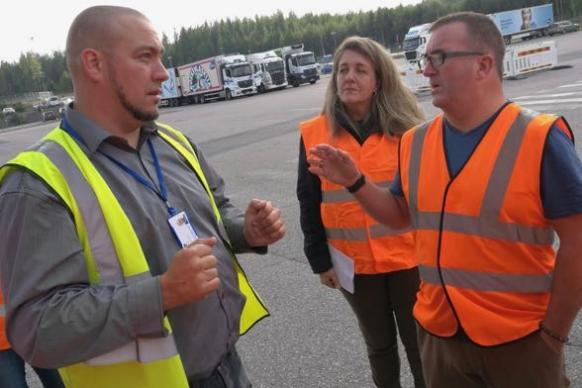 Guild Member and freelance journalist Chris McCullough was among reporters who visited Finland this summer – following an invitation from Maataloustoimittajat, the Finnish Association of Agricultural Journalists.

From start to Finnish – excuse the pun – the European Network of Agricultural Journalists tour of Finland this summer was a resounding success.

Starting and ending in Helsinki, the four day tour snaked its way mostly around the western side of the country incorporating farms specialising in dairy, arable, pigs and forestry.

This year Finland, or Suomi as the locals prefer to call it, is celebrating 100 years of independence.

Sandwiched between Sweden and Russia, Finland is one of the most northern countries in the world that practices agriculture and enjoys a self-sufficient food production for its 5.5 million inhabitants.

Forests cover 75 per cent of Finland’s land area accounting for some 22.8 million hectares.

Since 1995 Finland has been a member of the European Union and although most of the farmers we visited on the trip said they must stay in the Union, all of them agreed producer revenue has dropped dramatically as a consequence since joining.

Yet, the majority of the farmers visited on the ENAJ tour had no idea what their own specific costs of production were, some even going as far to say they were too afraid to examine them too closely.

On the one hand, Finnish farmers cite their grievances of operating within EU stipulations, and on the other hand, they say they simply cannot survive without the subsidies from Brussels.

Every Finnish farmer we visited had invested heavily into their businesses, whether it was for milking robots, grain dryers, new pig housing or forestry harvesting machinery.

These investments were aided by funds from the Finnish government and the European Union through the Rural Development Programme.

The farms I visited in Finland were some of the cleanest, well managed units I have witnessed in my many years of travelling as a journalist.

It has to be said though, that a significant percentage of them also had secondary jobs, the income from which, as some farmers alluded to, were keeping their farms afloat.

During the trip we ate reindeer meat, were greeted to our farm accommodation by the accordion playing farmer and sampled a cruise along the Baltic Sea towards Estonia.

The ENAJ tour to Finland was well organised and delivered a fascinating insight into farming so far north. Congratulations to the organisers.