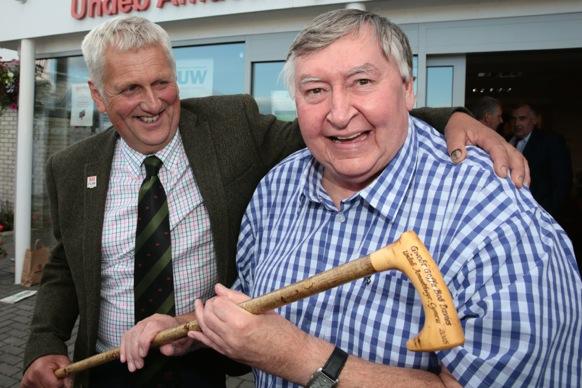 Farmers’ Union of Wales public relations director Peter Roberts, who retired from his post at the beginning of the year, is the proud recipient of the FUW Bob Davies Memorial Award.

The award – in memory of Farmers Weekly Wales correspondent Bob Davies, of Welshpool, who died in November 2009 – is offered to a media personality who has raised the public profile of Welsh farming.

Sixty-six-year-old Mr Roberts said: “Bearing in mind the calibre of those fellow media personalities that have already received this award, I am proud to follow in their footsteps.

“But I also feel like a gamekeeper turned poacher as, since the award’s inception, I used to be part of the FUW group that decided who should receive it every year.

“So I felt it was a bit nepotistic for me to be nominated this time but then I realised that I had covered the highs and lows of the farming industry for nearly 40 years before joining the FUW.

“And now it thrills me to recall that when I was 15 I used to deliver the South Wales Evening Post around my home village of Ferryside and over half a century later I still edit the FUW’s monthly newspaper Y Tir/Welsh Farmer, which is printed and produced by the Post’s current publishers.”

FUW president Glyn Roberts said: “On behalf of the FUW I would warmly like to thank Peter for his outstanding service to the FUW and Welsh agriculture, not only during his time with the union but also during his many years as a respected journalist.

“We’ve flown the FUW flag in Germany, Greece and Brussels and Peter’s commitment and passion for Welsh agricultural news and his experience and knowledge have benefited the union greatly.”

He was appointed Cambrian News editor in July 1991 and after seven years in that post left to set up his own editorial consultancy pr.news which he successfully ran until April 2002 when he became FUW’s press officer and Y Tir’s editor.