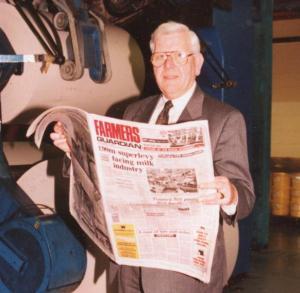 Gerald was a life-long newspaper journalist with an early background in general news reporting, writes Michael Finch, his successor at Farmers Guardian.

He then specialised in rural and farming issues on the weekly Preston Guardian, which at the time was part of the Lancashire Evening Post group, later United Provincial Newspapers.

This was the predecessor title to today’s Farmers Guardian and in 1958, when the new publication was launched, Gerald was part of the small team – including the then editor Ken Nightingale and his successor the late Stuart Seaton OBE – that laid the foundations that would develop the title from a circulation limited to north-west England into the national farming newspaper it is today.

Gerald succeeded Stuart Seaton in 1987 and was editor until 1995, overseeing an increase in circulation from 40,000 to 55,200 copies per week, which made it Britain’s fastest growing paid-for farming newspaper. Commercially, it was one of the best performing titles in the UPN group.

In the early days of Farmers Guardian, as well a reporting on farming and farming politics, Gerald specialised in the poultry sector, reflecting its importance in the north-west at the time.

He also carried the responsibility of being deputy editor to Stuart Seaton, in whose name the Guild’s regional farming and rural journalism award is presented.

Gerald’s appointment to the editor’s chair was welcomed by staff across both editorial and commercial departments – a reflection of the esteem in which he was held and the high standards he insisted on delivering.

In 1994, he was the delighted recipient of the Guild’s Netherthorpe ‘Communicator of the Year’ award and crowing cockerel trophy.

Gerald is survived by his wife Irene and sons Martin and Stuart, to whom the Guild sends sincere condolences.