The discrete but enormously valued work of the Members and Honorary Members of the Guild who manage the Charitable Trust to the benefit of those who face financial and other difficulties received an encouraging boost at the Harvest Service and Lunch.

Donations to the collection at St Brides (shared with the church) after the Harvest Service, the online auction of a day at the Goodwood Revival race meeting and the prize draw held during the lunch raised around £1800 for the Trust's capital fund. 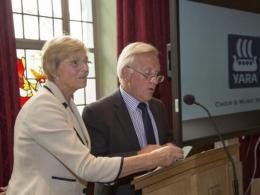 "Your Trust needs and welcomes social occasions like this to boost its asset base, which has grown in recent years to more than £150,000," said Stephen Howe, chairman of the Trustees. "That may sound a lot, but it does not go far given today’s interest rates and fickle money markets, and that’s why the trust needs your support for our raffle today."

The Trustees deliver themselves or arrange care and support for Members of the Guild - young and old - and their families who find themselves in need.

"In recent years that has included the provision of mobility equipment; car disability adaption; topping up nursing home fees; respite care; hospital transport costs; physiotherapy sessions; and financial support for those who find themselves without work," explained Stephen.

"Those are just a few examples of our necessarily discrete and confidential support," he added. "But we need your help on two counts: First, please let a Guild officer or one of our Trustees know if you suspect that any Member or their dependents may be facing difficulties for whatever reason; and let me assure you, all conversations are in the strictest confidence.

"Second, we welcome your financial assistance - not just today but throughout the year - either by subscribing to the £10 shares of the 200 Club for a chance to win a cash prize twice a year - or by sharing at least some of the proceeds of any fund-raising activities with your Trust."

Former President of the Guild, Baroness Hazel Byford, not only drew the winning tickets but successfully appealed for another £43 to round up ticket sales on the day to a magnificent £1000 - an appeal generously met by Teresa Wickham, a Member and Fellow of the Guild!

Guild chairman Ben Briggs will be spending a weekend for two at The Farmers Club, donated by the club itself, after one of his tickets was first out of the hat and there was a cheer for senior St Brides chorister Claire Seaton when she won a tour of the House of Lords with Guild President, Lord Curry. 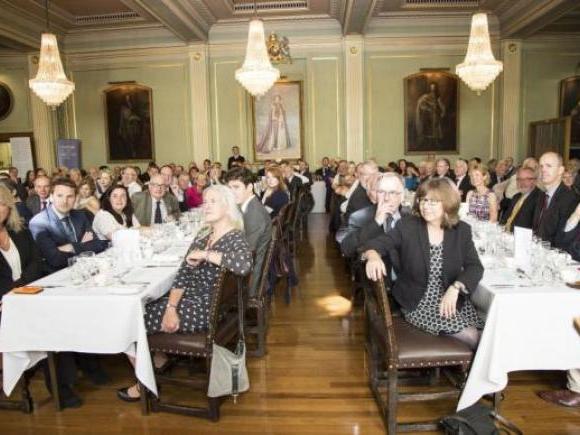 Theatre tickets to the value of £100 from John Deere and a year's National Trust membership for two from AGCO Ltd, were secured by Geoff Dodgson and Bruce Knight, respectively, while Liz Snaith won tickets to the Royal Bath & West Show.

Scottish freelance Andrew Arbuckle won Claas UK's donation of a turkey for Christmas - fortunately to be handed over in voucher form! In fact, Members in Scotland did especially well, with Jo Learmonth winning the NFU's garden centre vouchers worth £60, and Claire Powell and Jane Craigie winning Scottish gin and whisky donated by their countryman Drew Sloan!

Drew's bottle of Scottish liquer went to Ian Bell of the Addington Fund, while Alasdair Cox won a weekend B&B for two in Herefordshire donated by Catherine Linch of Pinstone Communications - who won the prize herself but insisted on a re-draw!

Jane Craigie's husband Mike donated a wood-working course at their home in Aberdeenshire, which went to the most appropriately-named person in the room, Natalie Wood. Then £100 John Lewis vouchers from Monsanto were welcome prizes for Liz Wright and for Rosie Carne, who has agreed to become a new Trustee of the Guild's charitable organisation.

To round off proceedings, Steve Mitchell secured Peter Hill's Farmpress donation of two bottles of Oxford Flint wine from the Brightwell Vineyard, while Sarah Peacocke was the lucky winner of a whole case of wine generously donated by Malcolm Bridges, publisher of British Dairying.

Prior to the Harvest Lunch, motorsport addicts Olivia Cooper and her husband Liam - who both compete in hillclimb events - successfully bid for the Goodwood Revival tickets donated by New Holland Agriculture. They and their children Alice and Archie report having a fantastic day that they are keen to repeat.

Read about the Charitable Trust and what it can offer here.