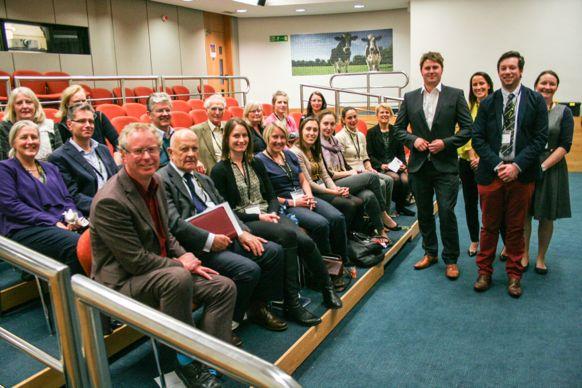 The Midlands branch of the Guild organised a seminar on the commercial use of social media as part of a programme of events being held through the year. Freelance journalist and PR specialist Jonathan Wheeler reports*.

Social media is an ideal tool to reach a scattered and potentially isolated audience like farmers, consultant Simon Haley told fellow Members and Friends of the Guild at a seminar organised by the Midlands branch hosted by NFU Mutual at its headquarters in Stratford-on-Avon, Warwickshire.

“Social media can work very well for farming; the key is building networks, trust and a relationship via communications,” he said. “It is that close network where people want to feel part of a group and you can create some value, provide some knowledge and get something back.”

Speaking to more than a dozen members eager to better understand how social media can be used to promote individuals, businesses and other organisations, Simon pointed out that while in pre-internet days contacts would tend to be geographical neighbours, the social media network could be spread around the UK or the world.

“Working with social media, participants can be in Scotland, Cornwall and Kent, but they are all effectively in the same room,” said Simon. “That is what makes it so powerful as a platform. It is a chance to get your foot in the door and tell people who you are.”

Participants’ activity rates vary widely – with 90% of posts being made by 1% of those involved; the remaining 10% of posts by another 9% and some 90% of participants being merely “lurkers” – watching but not contributing at all.

But replacing face to face contact with an electronic alternative does have its pitfalls, warned Ryan Vince, social media manager for NFU Mutual.

“It is a less personal style of communication, but it has to maintain a personal relationship; conversations that used to be conducted face to face are now being done electronically,” he said.

There are several challenges, the first being to find interesting things to say with regularity. Participants also have to understand that they are not involved in a purely business conversation, but aiming to encourage people to become involved in a community.

One particular challenge for NFU Mutual – with hundreds of agents spread across offices all over the country – is to ensure that everyone working with social media follows defined protocols and presents a consistent message.

Social media plays a crucial part in the “Who will fill your boots?” farm safety campaign, being run by the Farm Safety Foundation supported NFU Mutual.

Organiser Stephanie Berkeley said it was particularly appropriate for the campaign as it was targeted primarily at those aged between 16 and 40.

The organisation’s campaign includes interviews with young people who have been injured in farm accidents to help deliver the message.

“The social media campaign is run alongside a big presence at regional and local shows that will reach an expected audience of some 750,000 people,” said Stephanie.

Farm Safety Week is being held July 6-10. Watch for details of other Guild workshops, seminars and social networking events  on the Guild website and in our eAlerts.