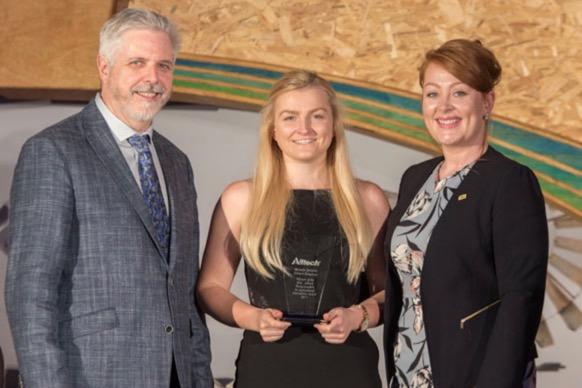 It was the opportunity of a lifetime to attend the International Federation of Agricultural Journalists (IFAJ) Alltech boot camp and IFAJ Congress in South Africa last year, writes Melanie Jenkins.

I could quite happily go through everything – there is so much to tell. Suffice to say, I would love to encourage others to apply to represent the BGAJ at similar events abroad in future.

After landing in South Africa, the first day of the boot camp consisted of members of the Young Leader and Masterclass groups arriving from all corners of the globe.

The Masterclass comprised delegates from Togo, Zambia, Gambia, Uganda, Cameroon, Tanzania, Ghana and from Georgia – each without their own guild of agricultural journalists.

In the evening, we all had a meal together under a vine covered pergola, where we received a welcome from IFAJ president Owen Roberts.

Everyone then introduced themselves briefly as a bit of an ice-breaker.

The following day consisted of several farm visits hosted by the two main sponsors of the Young Leaders and the Masterclass: Alltech and Pioneer Du Pont.

The Alltech visit took us to a diverse family business that had set up their own feed mill, while Pioneer Du Pont hosted two farmers who talked about agriculture in South Africa.

We also visited one of their scientific research facilities.

The day concluded with two presentations from Agri SA, a federal organisation that promotes the interests of its members.

Presentations addressed the biggest issues facing South African agriculture along with a number of facts and figures, to give the group a lot of in-depth information.

The third day was mostly spent in a conference room, but it was one of the most useful and interesting parts of the boot camp.

We were given two presentations on leadership – one from Alltech’s Patrick Charlton, and the other from IFAJ secretary general Steve Werblow.

Most of the rest of the day comprised of short presentations from the group about the biggest challenges facing agriculture in each person’s country.

This was one of the most interesting and insightful parts of the boot camp.

It helped everyone understand how significant a role each of us plays for individual farmers and the agricultural industry as a whole.

Once the congress started officially, I was able to get to know some of the most wonderful people and experience a host of South African agricultural businesses first hand.

I am very lucky to have met the group of Young Leaders – we all got on so well together and have been in regular contact since the end of the Congress.

We are all planning to reunite as soon and frequently as possible.

I’d be happy to regale other BGAJ Members with my tales from the trip.

They include my winning an IFAJ swiss army knife for a story about my worst job, and then having it confiscated at airport security, only to still end up bringing one back to the UK with me!

But most importantly, I learned so much, met amazing people and had a wonderful time.

I got on very well with Johnnie Belinda Cluff, the IFAJ global coordinator, during the trip, and she invited me to attend the Canadian guild’s conference in September.

I am looking forward to seeing how the conference is run and the ideas I can bring back with me.

For all of this, really I need to say thank you.

If future participants enjoy themselves half as much as I did, then applying to attend a boot camp and IFAJ congress is certainly worth it.

I would like to thank the British Guild of Agricultural Journalists for putting me forward for the trip and for generously covering my travel.

I could not have gone without your support and it is unlikely I would have gone to an IFAJ Congress without encouragement – the problem now, is that I want to go to all of them!

For all that, I need to thank my boss, mentor and friend, Olivia Cooper.

I cannot say thank you enough and despite my career hinging on my use of words, there are none that express how much I appreciate your kindness.