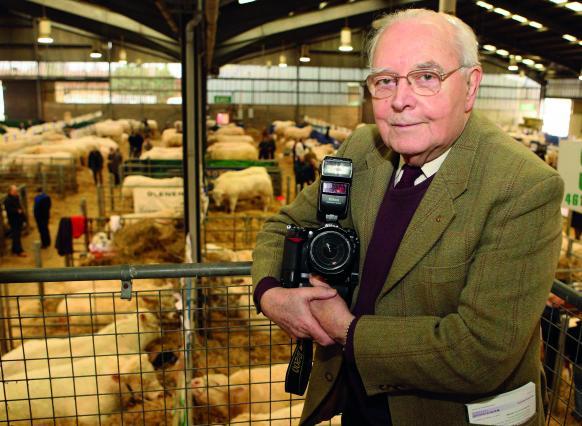 Former Member of the Guild, freelance photographer Louis Flood senior, has died at the age of 84.

Louis was well known in the Scottish agricultural community as a regular at major events, notably the world famous Perth Bull Sales, Perth Show, the Highland Show in Edinburgh and the Smithfield Show in London.

Former United Auctions chief executive David Leggat said: “Louis had a close association with the Perth Bull Sales and he was a wonderfully skilled photographer. His pictures of the cattle were always in great demand, but also those of the people around the sales.  Louis was a great character and very much part of life at the market.”

The chairman and directors of Perthshire Agricultural Society were saddened to hear of his passing. Neil Forbes, show secretary, said: “Louis was well known to all our livestock and trade exhibitors and took great pride capturing the atmosphere of the show, whether it be a champion animal or a child with a pet.”

Born and bred in Perth, Louis captured the changing face of the city and its rural hinterland over six decades behind the camera, reports the Daily Record in a tribute. He began his long and distinguished career in photography at the tender age of 14 with an apprenticeship at Star Photos in 1947.

After completing National Service with the RAF, he enjoyed a spell with the Daily Mail in Dundee before joining the staff at Alex C Cowper. In 1977, he established his own business, Louis Flood Photographers.

An archive of his work covering special moments in family histories, Royal visits and other big occasions in Perth and Kinross life is held in Perth Museum & Art Gallery, a fitting tribute to how well he was known and respected in the area.

The Guild sends its sincerest condolences to his wife Kathleen – they met during his stint with the Daily Mail and married in 1959 - son Louis, a fellow photographer and Member of the Guild, daughters Laura and Liesa and three grandchildren, Lottie, Rory and Joseph.