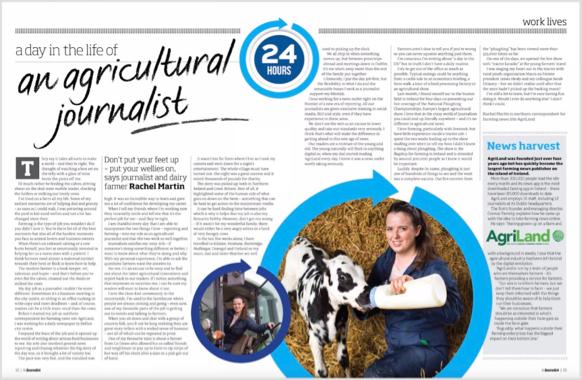 A day in the life of an agricultural journalist is profiled in the latest issue of The Journalist – the magazine of the National Union of Journalists.

The December 2017 issue of the magazine devotes a double-page spread to the feature, which was written by Rachel Martin, northern correspondent for the farming news website AgriLand.

Having been brought up on a dairy farm, Rachel says: “My day job as a journalist couldn't be more different.

“Sometimes it's a business meeting in the city centre, or sitting in an office rushing to write copy and meet deadlines – and, of course, readers can be a little more vocal than the cows.”

Founded just over four years ago, AgriLand claims to be the largest farming news publisher on the island of Ireland.

Rachel says: “I am thankful every day that I am able to incorporate the two things I love – reporting and farming – into my role as an agricultural journalist and that the two work so well together.”

She adds: “Journalism satisfies my nosy itch – if someone's doing something different or better, I want to know about what they're doing and why.

“With my personal experience, I'm able to ask the questions farmers want answers to.”

AgriLand employs 16 staff, including 12 journalists at its Dublin headquarters,

Although she was asked to write about “a day in the life”, Rachel says in truth she doesn't have a daily routine.

“I try to get out of the office as much as possible,” she says.

“Typical outings could be anything from a cattle sale to an economics briefing, a farm walk, a tour of a food processing factory or an agricultural show.”

Rachel adds: “I love that in the crazy world of journalism you could end up literally anywhere – and it is no different in agricultural news.”

AgriLand attracts more than 300,000 readers every month and its news app has been downloaded 80,000 times.

The full article can be seen on The Journalist website here.