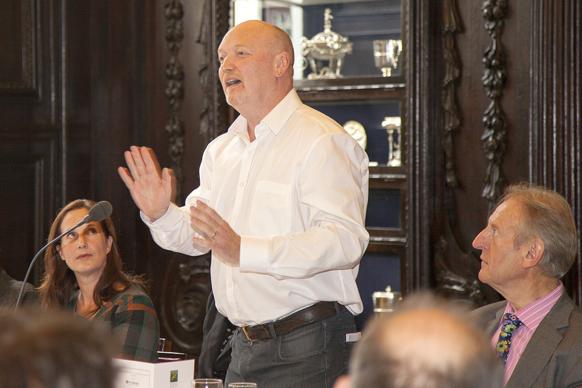 Guild Members and Guests digested a light-hearted talk with a serious message at this year's annual Harvest Lunch.

Failure to manage succession is putting the future of British family farms at risk, diners were told.

The speech was delivered by Professor Matt Lobley (pictured above), co-director of Exeter University's Centre for Rural Policy Research.

More than 120 Members and Guests gathered for the 2015 Guild Harvest Lunch at Stationer's Hall, London, on Thursday, 8 October.

The annual lunch was generously sponsored by NFU Mutual and the British Society of Plant Breeders(BSPB).

“The process of planning the future of farm businesses can be made less daunting and be more readily managed if management and ownership are considered separately,” he said.

“Football clubs are constantly changing managers. Each new manager is the successor to the previous occupier of that position but ownership of the club hasn't changed.

“While farms and football clubs are very different organisations, the UK agricultural sector needs to face up to the succession challenge.

“Because most farms are family homes as well as businesses, succession planning is a very difficult challenge involving multiple generations and the desire to avoid conflict all too often leads to failure to start planning for the full involvement of the next generation.”

For agriculture to recruit the best and brightest people, farming had to be an appealing career choice, said Professor Lobley.

Waiting until their 50s before gaining significant managerial responsibility was unattractive to prospective successors, he added.

“Planning the future of the farm means having potentially difficult conversations. However, failing to make plans in a timely manner risks breaking up both the business - and potentially the family.”

The project will include a series of seminars around the UK in 2016 to provide farmers with information on the options available to them to hand on their farms while treating all family members fairly.

The need for more practical help on farm succession planning was highlighted by recent research commissioned by NFU Mutual in conjunction with Farmers Weekly.

It revealed that 54% of UK farmers have not made succession plans. This equates to more than 40,000 farms nationwide.

Photos from the 2015 Guild Harvest Service and Harvest Lunch will be posted on the website as they become available.