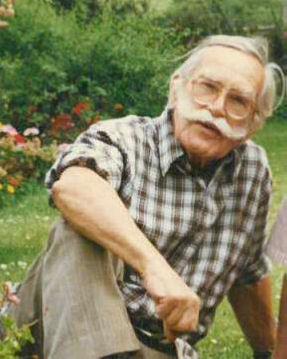 Peter Bell, a past General Secretary, Chairman, President, Senior Fellow and ardent supporter of the British Guild of Agricultural Journalists, passed away in late December. He was 97.

In his heyday, writes Denis Chamberlain, Peter, with his bristling handlebar moustache and boundless energy, was one of the most recognisable, widely respected and enthusiastic members of the corps of farming press when that group numbered representatives of every National paper and all broadcasting organisations as well as the wide array of farming titles.

He was a member of the Guild from the very early days of his career, served on Council and was General Secretary from 1967 to 1985. He was an enthusiastic supporter of the Guild of Agricultural Journalists’ Charitable Trust and served as a Trustee.

Peter’s interest in plants, animals and rural people (all three seemed to hold equal fascination for him) began as a schoolboy and progressed at Cambridge where he took a degree in Natural Science, interrupted by the outbreak of war in 1939. He joined the army and saw active service. A distinguished military career took him to Africa, the Middle East and Italy via the West Country, Iceland and Scotland. He returned and joined the Farmer and Stockbreeder magazine in 1946.

From his early days on the Farmer and Stockbreeder, Peter was fascinated by agricultural politics. It was his specialism while on the Stockbreeder (along with matters veterinary) and brought him into contact with a whole range of industry leaders, both in Government and in the NFU, CLA, Milk Marketing Board and other institutions.

A straighter man none of them had ever met and his total commitment to ferreting out the truth and being a genuine ‘reporter’ kept even the most slippery political operator on their metal. In return, without exception, they held him in high regard.

It is to his great credit that Peter made the transition from the totally commercial Farmer and Stockbreeder, to the NFU’s in-house journal, British Farmer, with no loss of his own independence or integrity and no break in his stride when it came to keeping politicians under scrutiny. Peter was a journalist who believed in the simple maxim of “going out, finding out, and putting it in the paper”. Many of us were privileged to have him as a friend and role model in our careers.

Towards the end of his career, reporting on animal health and veterinary matters occupied most of his time. It also helped him add to his array of awards and brought due recognition of his exemplary career – including an MBE and honorary membership of the British Veterinary Association.

He won the Guild’s Netherthorpe Award for contributions to farming journalism in the 1980s, and also the BVA's annual prize, which normally went to a member of the veterinary profession.

Peter travelled widely (often on the proceeds of his award winnings!) to see and compare animal health and welfare issues throughout the world and did a lot of broadcasting – mainly on animal health subjects – where his clipped diction and military delivery held everyone’s attention and added genuine authority to the subject on which he was speaking.

In the early 1980s he found myself involved with efforts, as he put it, “to give the final knock-out to bovine tuberculosis”. It was an abiding sadness that this work remained unfilled.

Throughout his career, Peter was an inveterate chronicler and wrote histories of the Guild, The Farmers Club and the Farming and Wildlife Advisory Groups.

Always a committed Christian and dedicated family man, Peter retired to Dorset and then moved to end his days in Somerset. His wife Vivian died in 2011. He is survived by five children, Elizabeth, John, Mary, Christine and Michael, grandchildren and great grandchildren.

A thanksgiving service for Peter Bell's life was held in Misterton, Somerset on January 4.

Any Guild member who would like to send a note in tribute or share memories of time shared with Peter should send them to Peter Hill for the Guild website.

Stephen Howe: Very sorry to hear about Peter Bell. A real gentleman in every sense of the word and a very professional journalist who gained the respect of readers and  key contacts in the industry. His long service as Guild Secretary and his foresight as an early supporter and trustee of the Guild's Charitable Trust helped to re-enforce the foundations of the Guild in its heyday. Bless him.

Wendy Ryder: A wonderful gentleman and a true Christian; may he rest in peace.

Trevor Hayes: A very astute, professional journalist who would not take “no” for an answer and who was more than helpful to those who required help in understanding what was going on.