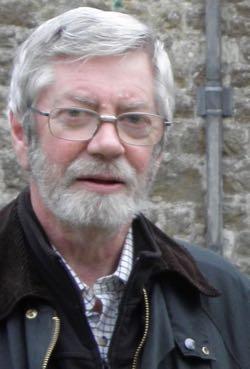 Richard Saunders, the former news editor of Farming News and Farmers Weekly, and an enthusiastic Member of the Guild, has died. He passed away in the early hours of 25 February, following a valiant battle against cancer.

Born and brought up in the Hampshire village of Bishop’s Waltham near Winchester, Richard trained as a journalist on the Hampshire Chronicle, later moving on to daily papers, including the Southern Evening Echo, the Western Daily Press and the Torbay Herald Express where he began to specialise in agricultural journalism.

In 1976 he shifted full time to agricultural reporting and joined Farmers Weekly, where he spent ten happy years progressing from reporter, to deputy news editor and finally news editor.

Rival publication Farming News spotted his talent and tempted him away to become its news editor. He spent another ten years there before the magazine’s closure due to the competitive nature of agricultural publishing and the burgeoning online economy.

Following the demise of Farming News, and recognising that online was the future, Richard (no technophobe) set up Landwriter, an online service providing curated agricultural news feeds for websites and corporations.

He was also recruited by the magazine Farm Business as its freelance news editor and played a major role in helping establish the Guild's presence on the internet to provide a more timely source of news and information to members.

It was only ill health which forced his retirement from the industry that he loved.

He will be missed greatly by all those who encountered his dry wit and pithy wisdom - and the many hostelries that served as temporary offices and places of inspiration will also miss his custom!

He leaves behind Ruth, his beloved wife of some 49 years and their three children: Claire, Esther and Tim, who wrote this fitting obituary, and also his five much loved grandsons.

A funeral service was held on Thursday, 16 March, at St Clement’s Church, Outwell, Norfolk. Donations to the Sue Ryder organisation are welcome.

Any Member or Friend of the Guild who knew Richard and would like to share their recollections of him can email them to Peter Hill.

Trevor Hayes: I was sorry to read about the death of Richard Saunders. Although we had not been in touch for many years I can still remember the time we worked together at Farmers Weekly during the 1980s. He was a good reporter and a good companion to be with either on jobs or enjoying a beer in the pub after work.

James 'Jim' Evans: (chief sub-editor, Farmers Weekly, 1982-2002) Very sad to hear the news of Richard Saunders’ passing. We worked closely together as news editor and chief sub for several years when I first joined Farmers Weekly and I missed him a lot when he decided to go to a rival journal. Back in the ‘80s and '90s there was a strong drinking culture on the Weekly and most of the staff would disappear to the local pub in Sutton at lunchtime or wherever we were being printed at the time on press days. Richard always enjoyed a pint of bitter, as did most of us, although it never affected his high standards of journalism or his easy-going demeanour and droll humour. That side of friendship and bonding has all but disappeared now, as far as I know, and would probably be disapproved of in a modern workplace but it was widely accepted then and was always fun. Richard was unfailingly helpful to me and went out of his way to encourage young reporters too. His local paper training was fundamental to his professionalism and high quality writing and editing. He once told me that when he started at the Weekly as a reporter, he was so short of cash that he slept in his car to start with before becoming a valued member of the team. A great loss to farm publishing and he will be much missed by his friends and acquaintances.

Peter Hill: Although Richard and I never worked together professionally - he covering news while I focused on machinery - he was always friendly when we met occasionally at events like the Royal and Smithfield shows. We did work closely, however, when building the Guild's presence online with news and information on the original website. He was always enthusiastic about this project to improve Guild communications and made a considerable contribution in that regard. During our numerous conversations, I came to appreciate Richard's dry sense of humour as much as his professionalism.

Cedric Porter: Richard was the news editor when I joined Farming News. From day one, he was a great source of wisdom, advice, support, healthy cynicism and pub companionship. He would guide a team of raw young journalists to capture stories and write them in a way that was impactful but engaging. He also had the knack of not treating himself or what we were doing too seriously. As ‘Old Skipper’ he allowed us to report on absurdities of farming life, including the time we were sent a milk quota premium telephone number that turned out to be a sex line offering ‘correctional services’ to callers!

I also valued his support and friendship as we established Farm Business. Richard was the perfect mix of old and new school. Old school in that he knew the value of a good story and the importance of deflating puff, but new school in that he embraced new technology as a way of getting good journalism across. In a fast-changing world, we all need to value the principles of integrity, comradeship and truthfulness that Richard stood for.

Marcus Oliver: (Farming News editor, 1983-1991) Richard Saunders was poached by Farming News to replace the excellent Roger Abbott when the South African decided to move on in the mid-1980s. His arrival coincided with the adoption of ‘new technology’ on the weekly, involving each of our five regional editors. These guys were provided with an Epson keyboard, which had the smallest screen imaginable – think old-style Nokia mobile screen – and after laboriously keying in copy the operator had to fasten his landline telephone receiver to a set of rubber acoustic couplers, ensuring a good tight seal.

A call had to then be put through to the news desk where, invariably Richard, or anyone else handy would fasten his or her receiver to a matching acoustic coupler in the office. The transmission would follow, emitting a weird series of electronic bleeps and buzzes and the associated printer would screech into life.

The beauty of the system was that whatever was keyed in actually got printed out – a step change in accuracy when it came to lists of agrochemicals or livestock breeding data simply read over the telephone. Of course it was often completely thrown by climatic conditions or public call box inadequacies (just consider the amount of loose change that had to be available).

But my abiding memory of Richard was of him standing patiently by the printer in the middle of the office as he coaxed reams of lovely copy out of the recalcitrant telephone.

As editor, I found Richard’s contribution to be particularly valuable as he had a solid newspaper training rather than the more usual agricultural background. His news sense was brilliant and time after time his judgement and instincts were vindicated.

Indeed, to my shame, I recall going on a particularly arduous facility trip to India to report on how bovine somatotrophin (BST) was being used on water buffalo to increase milk yields. Having eventually found a teleprinter operator in remotest Gujarat to key in and transmit my copy back to London, not to mention overcoming other desperate barriers to newsgathering, I arrived home to find that Richard had stuck my amazing yarn beneath the fold on page 3, and not on the front page! He had of course got a much superior page one splash and I had to choke silently on the demotion and disappointment.

Mention has been made of Richard’s skill with a pint glass and his droll humour, both totally true. I can’t erase from my mind his comment as we mounted the stairs to a Goswell Road typesetting emporium for the first time as he raised a jaundiced eye to the ceiling and said: ‘that beam would be a good place for a hanging’. We always shared a thing about a £10 note because he would often borrow such a sum, though scrupulously repay it. As time went on I would cruelly ask for repayment even though there had been no lending transaction. Somehow he always knew when the demand was real or false. But it was fun to see his worried look!

A marvellous work colleague and companion. I will miss him greatly but always treasure the shared times on Farming News.

Roger Abbott, FBGAJ: I was devastated when I heard of Richard’s death - he was indestructible. Richard followed me as News editor at Farming News and then when I returned to the magazine a few years later as a sub and later as chief sub, we worked closely together in Woolwich for a few years. I also called on Richard and his son Tim to help sort out the Guild's website when I was chairman. We shared a lot of laughs and several beers (or glasses of dry white wine), as well as “solving” several challenges facing the world.

Richard was a true gentleman, a great colleague and a far better journalist and writer than I could ever be — somebody I admired and respected. Journalism is a poorer place without him.