Founded some 75 years ago, the British Guild of Agricultural Journalists is enjoying one if the most energetic periods in its history.

The Guild was formed in 1944 – not because a group of journalists thought of the idea but at the suggestion of Sir Reginald Dorman-Smith, who had served as agriculture minister in the British Government in 1939 and 1940.

Sir Reginald wanted to encourage informal contact between government ministers and the farming media through an agricultural reporters’ organisation.

When that vision became reality, the first members of the Guild's management Council picked up on the theme – but added a social element.

Informal lunches in agreeable London locations became a central feature of Guild activities, largely for the benefit of full-time farming correspondents on national newspapers such as The Times, Daily Express, Daily Mail, Daily Telegraph and the like.

For the leading politicians invited to attend, including Government agriculture ministers and other influential people, it was an efficient way of giving informal briefings to journalists on policies and priorities.

Early meetings of the Guild’s management Council were held in the Farmers Club located in Whitehall amidst Government buildings and overlooking the River Thames. The club is now the Guild’s registered address and remains the Council’s regular meeting place between virtual meetings online.

The 1950s and 1960s were a flourishing period for agricultural journalism in Britain, since post-war rationing had opened many eyes to the importance and news value of food production, with its political and technical issues.

The launch of new national and regional titles, as well as the rise of specialist publications covering mechanisation, arable and dairy farming, as well as commercial horticulture, brought more people into journalism and into the Guild.

In 1957, the Guild accepted its one hundredth member; 30 years later, membership exceeded 500.

Not that the organisation was ‘pure’ any more. Associate membership was created to accommodate those in commercial communications – press and public relations – who did not earn their livelihood ‘wholly or mainly’ by agricultural journalism, as the rules required.

Associates progressively wielded more influence in the organisation, often being more willing to help run Guild affairs than their journalist counterparts, and as the distinction between the role of journalists (particularly freelancers) and PRs has become increasingly blurred, the Guild eventually settled on a single class of membership.

Since then, the Guild has continued to adapt: the number of Council members has been halved and online meetings are used when practicable to curtail costs; communication with members is now more frequent through a website, monthly e-newsletters, Facebook and Twitter.

There is a popular and effective professional development programme and an increasing number of professional awards. ,

It is also actively involved in the European agricultural journalists’ organisation ENAJ, as well as the IFAJ, regularly succeeding in putting forward candidates for the professional development experience for young journalists that is held during the annual worldwide Congress.

Proceeds from IFAJ Congress 2014, organised and hosted by the Guild in Scotland, has resulted in a legacy fund that will also help with journalists’ professional development.

Since 2015, the Guild has offered an unprecedented fully-sponsored study tour to countries including Brazil, China, India and Argentina for journalists to report on agriculture and food marketing topics.

There may no longer be informal lunches with agriculture ministers but these days the Guild offers more opportunities for members to meet and socialise at agricultural shows and technical meetings – as well as Guild events.

The most notable of these is the annual Harvest Service held every autumn at St Bride's, the journalists’ church in Fleet Street, followed by a Harvest Lunch of British produce for members and guests in one of London’s magnificent and historic livery halls.

In short, well beyond its 70th year, the Guild continues to promote the interests of all involved in telling the many and varied stories of Britain’s great agricultural industry.

The Guild's 2018 Harvest Service and Lunch will take place on Thursday, 11 October 2018. The church service at St Brides will be followed by drinks reception and three-course luncheon at the prestigious Painters' Hall. Not yet open for bookings – but save the date and watch this space. 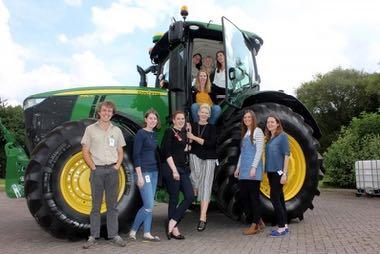 The Guild's John Deere Agricultural Journalism Training Course is now open for applications – with an application deadline of 27 April 2018. For more details, and the chance to win £250 for the best article written during the course, click here.

Journalists & Photographers: Changing your job? Been on an interesting or unusual assignment? Or run an effective editorial campaign? Or won an industry award? If so, we'd love to hear all about it.

PR/communications specialists: Tell us about your campaign successes and awards, new staff appointments, and new clients you represent.