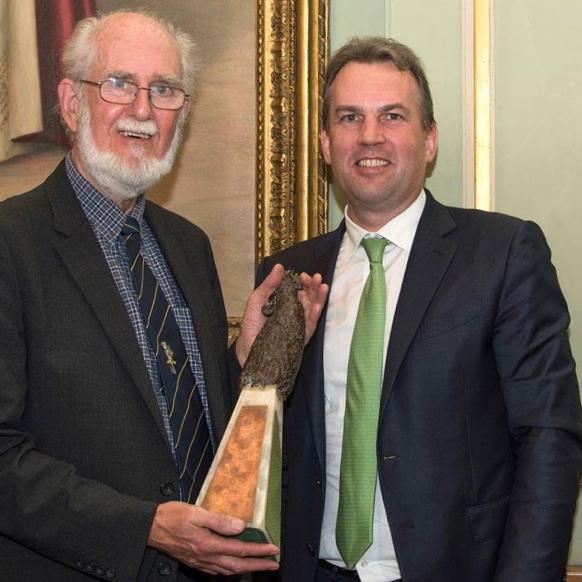 Lincolnshire broadcaster and author Alan Stennett received the 2017 Netherthorpe Communicator of the Year Award for his outstanding and sustained contribution to agricultural journalism.

The highest accolade awarded by the British Guild of Agricultural Journalists, Netherthorpe recipients are recognised for their contribution to the dissemination of knowledge and understanding about agriculture in its widest sense over a number of years.

Alan has presented the weekly Lincolnshire Farming programme on BBC Radio Lincolnshire since it was first broadcast over 35 years ago. Arguably the voice of Lincolnshire farming, his influence extends to the wider rural community far beyond his home county.

Judges said: “He is a great journalist - very knowledgeable, well connected and very well respected in the wider industry. He is just so active, you see him out, everywhere – he always goes the extra mile.

“He has a fabulous interviewing style, outwardly kindly and engaging with an ability to deliver – and get an answer to – a killer question. He tells a great farming story to the people who listen to Radio Lincolnshire – good news for communicating farming to a wider audience.”

Alan said: “It is an amazing award and this is a special moment. I have to thank every farmer in Lincolnshire for providing me with things to talk and write about. I'd also like to thank BBC Radio Lincolnshire who have always supported me in what I have done.”

Alan is also the author and narrator of series of local historical and farming books, videos and DVDs that combines his agricultural knowledge with a love of the countryside, its people, the local way of life, old farm machinery and railways.

He was awarded a British Empire Medal for services to agriculture and broadcasting in the 2016 New Year Honours List.