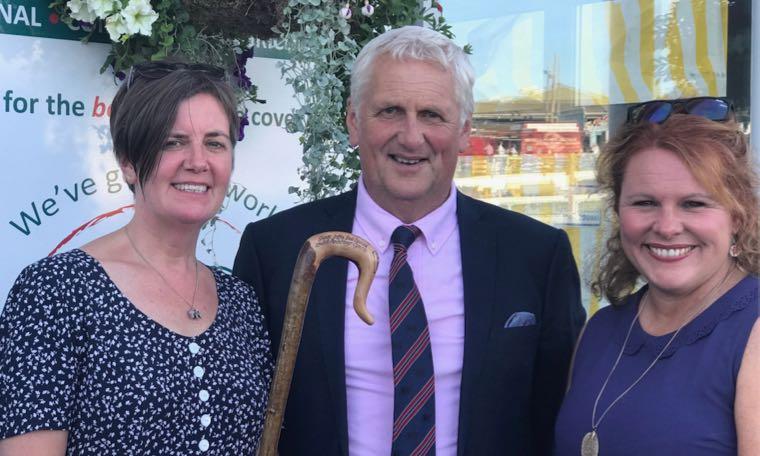 An accolade made in honour of former Guild member Bob Davies has been awarded to BBC Radio Wales Country Focus producer Pauline Smith.

Every year the Farmers’ Union of Wales recognises a media personality who has raised the public profile of Welsh farming with the annual Farmers Union of Wales Bob Davies memorial award.

A well-known and popular Guild member, Bob made a major contribution to agricultural journalism in Wales, including 44 years on Farmers Weekly, before he died in November 2009.

Announcing this year’s winner of the Bob Davies award, FUW President Glyn Roberts said Pauline had been raising the profile of Welsh farming but quiet and diligently in the background producing BBC Wales' only dedicated rural programme for many years.

“Pauline is not one to draw any attention to the work she does - yet the program she has been producing for BBC Radio Wales for all those years, is one that has and continues to serve everyone living in the countryside.

“Her strength and that of the program, lies in looking behind the headlines, whether it be the far reaching effects of foot and mouth, the implications of Brexit, lack of rural transport or opportunities for the young.

“It's something that, as the producer, she has succeeded in developing over the years, giving a voice to people that are not always heard.

“It therefore gives me great pleasure in recognising all your work with the FUW Bob Davies Memorial award.”

Pauline has been working at BBC Radio Wales as a journalist since 1991, primarily then for the breakfast programme Good Morning Wales..

But when juggling the early and late hours with family life became a bit of a challenge, she was offered the role of producing Country Focus.

It was thought the programme needed a new impetus and she gladly took on the role, starting afresh with a new presenter at the time, Melanie Doel. It turned out to be the ideal opportunity to combine her passion for radio and a love of the countryside.

Pauline has since travelled all over Wales, up and down the A470, around the country lanes and down many a farm track and by her own admission consumed far too much Bara Brith and Welsh cakes but has enjoyed many a warm welcome.

Speaking about the award, Pauline said: “I am surprised, delighted and humbled to receive the Bob Davies memorial award.

“I'm far more accustomed to encouraging people to speak out and talk about themselves, finding those stories and working behind the scenes.

“I can then leave it up to my presenter, Rachael Garside to put people on the spot or elicit their story. I would like to thank Rachael for putting up with my endless emails and whims and my colleagues for their contributions to Country Focus.”