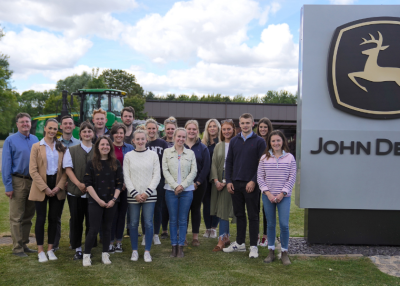 The BGAJ John Deere Training Course returned in July with 17 successful applicants taking part in an immersive introduction to the world of agricultural journalism and PR.

The course has helped to produce some of the leading editors, correspondents and communications leaders working in the industry today.

All participants met at a Nottingham city centre hotel on Sunday 3 July for the first time.

After a brief introduction that evening, discussions revolved around print and online journalism, and current training and job opportunities.

With presentations by David about news and feature writing in between, two guest speakers then took to the stage.

That evening the group dined out at the Cosy Club in Nottingham where conversations about PR, journalism were supported by mojitos.

A slightly different experience was in store for the final afternoon.

All course attendees were given their pick of the John Deere tractor fleet to drive before being given a tour of the newly-opened John Deere Apprentice Centre.

To finish off, everyone retreated to the classroom to create a written piece before being given an outline of the award assignment and departing their separate ways.

Next steps will see the announcement of the award winner taking home the £250 first prize and runner-up receiving £100 with both being invited to the Guild Harvest Lunch in October.