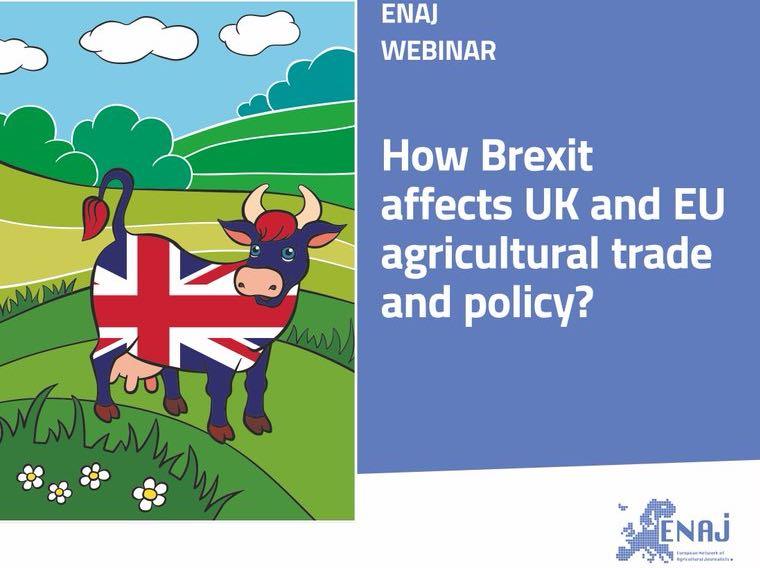 Gene editing and animal welfare are among the topics expected to be discussed by panellists from the United Kingdom, Ireland, the Netherlands and the European Commission in a forthcoming Brexit-themed webinar from the European Network of Agricultural Journalists (ENAJ).

Organised by BGAJ members Adrian Bell and Cedric Porter, the 90-minute session – scheduled for 3pm on Thursday 25 February – will look at how Brexit is ‘bedding-in’ since 1 January and examine what the future holds for British agricultural policy: in particular, how will it contrast with reform of the EU’s Common Agricultural Policy (CAP) under the European Green Deal, and where is divergence likely to occur?

Nick von Westenholz, Director of Trade and Business Strategy at the National Farmers’ Union (NFU) and previously its Director of EU Exit, will contribute to both parts of the webinar. Joining him for the first part will be Tim Heddema, Agricultural Counsellor at the Embassy of the Kingdom of the Netherlands in the UK; and a representative from the agri-food sector in Ireland, the EU27 state for whom Brexit’s effect on food and farming has greatest impact.

Looking ahead to future agricultural policy, Nick will be joined by Defra’s Ciaran Devlin – a departmental lead in development of the new Environmental Land Management schemes (ELMs) that are expected to play a prominent role as direct payments are phased out – and a spokesperson from the European Commission.

“The diversity and expertise we’ve brought together for the webinar panel will provide journalists across the ENAJ with plenty of copy,” says Cedric, editor of the monthly Brexit Food & Farming briefing and the webinar’s moderator.

“Despite the UK and EU taking different paths, they remain inextricably linked. Overnight, the UK has become the EU’s biggest agri-food export market, overtaking the US. It’s also overtaken Brazil as the number one importer.

“Domestically, between now and 2027 English direct farm payments will be reduced to nothing, switching to payments made for ‘public goods’ – specific environmental, efficiency, animal welfare or social benefit deliverables. And with the UK government announcing a new consultation on gene-editing, differences between the two jurisdictions are likely to develop quickly.”

Adrian, owner of Agro Mavens and one of ENAJ’s founding members, says the Brexit webinar should help to demonstrate the value and importance of BGAJ retaining its ENAJ membership.

“Despite Britain’s withdrawal from the EU, agricultural trade and policies will see continuing interaction and effect. Companies from the Netherlands, Belgium, France, Ireland and other EU countries operate in the UK – indeed, the UK’s biggest dairy processor is Danish co-op Arla, while German-owned Müller and Ireland’s Ornua Foods, owner of the Kerrygold and Pilgrims’ Choice brands, complete the top three.

“It’s essential that agricultural journalists across Europe, not just within the EU, should continue to interact and have access to a quality flow of information that will help and inform farmers and other stakeholders throughout the agri-food chain.”

BGAJ members are strongly encouraged to join the webinar, which is free to attend, on Thursday 25 February at 15.00 GMT.