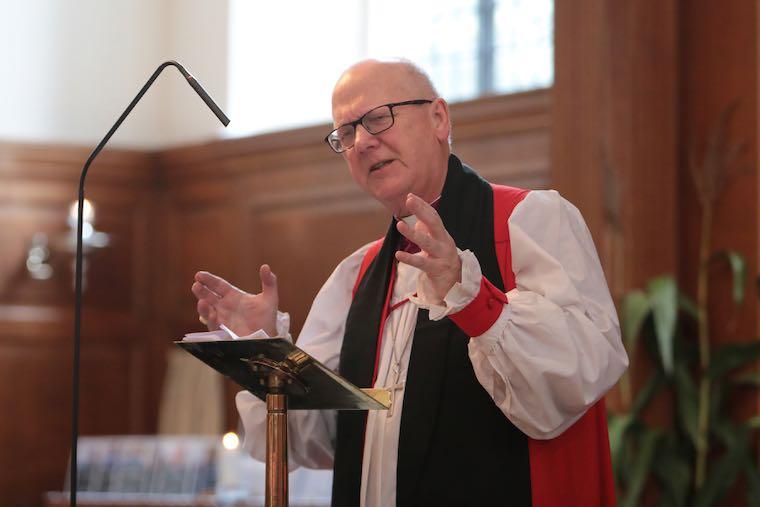 The following address was delivered by the Bishop of St Albans, Right Reverend Alan Smith, at the Guild’s 2019 Harvest Service.

“For centuries, rural communities have harvested their crops and then brought some of the best of their produce to church. They came to give thanks to God for a bountiful harvest - the fruit of their labours - which would sustain them during the dark winter months.

So in preparing for this service I asked myself: “What is your harvest?” “What is the harvest produced by journalists and photographers and press officers and graphic artists and designers and broadcasters and others of you who serve the rural and the agricultural communities? What do you bring today to offer to God in thanksgiving – the fruit of your labours - in this harvest service?”

Well, I guess your harvest comes in the form of words and images – and both can be immensely powerful. As Edward Bulwer-Lytton said nearly 200 years ago “The pen is mightier than the sword”.

Think, for example, of the words of Martin Luther King, who dreamed a dream of a day when:

Luther King’s words inspired a generation to stand up for their rights. Or what about the power of image? Think of the Turkish policeman picking up the small dead body of a Syrian boy who was face down in the waves. He’d drowned as his family fled from a war zone and tried to make it into Europe. It stunned people across Europe and galvanised millions to support refugees.

However, we are now entering an era when such as phrases such as ‘terminological inexactitude’ and ‘alternative facts’ are being bandied around. It’s a period when ‘being economical with the truth’ is considered normal and something we shouldn’t be worried about.

There was, apparently, no hint of irony when Mary Archer commented that her husband, Jeffrey, had “a gift for inaccurate precis”. What is so deeply concerning is that these sorts of things are being normalised by a President of the USA, who believes that if he keeps repeating something, whether it has any basis in reality or not, then his ‘version of the truth’ will win.

Fortunately, the journalists running the Washington Post’s Fact Checker have not been intimidated and have not only identified more than 12,000 misleading or inaccurate ‘facts’, but are insistent on setting the record straight. At the same time, it seems that Russia has tried to influence foreign elections and some experts argue that China has a powerful role in the online world in editing Wikipedia to influence world opinion. Words and images are powerful things.

We need you journalists to produce a harvest of faithful reporting based on telling the truth, whether you find yourselves on the front line of the war in Syria, or in reporting on the fall in the price of beef, or helping us to think carefully about the implications for the agricultural industry and for our nation as we stand on the eve of Brexit. You need to tell the truth in word and picture and to do it accurately and fearlessly.

The role of journalists in society is so important that the great German theologian Karl Barth would often say: “I always pray for the sick, the poor, journalists, authorities of the state and the church - in that order”.

It’s a very unusual day that I don’t cut a story out of a newspaper or file a briefing paper to be used for a question to the government, or in preparation for a debate on some aspect of agricultural or rural life in the UK.

Of course, the danger for all of us who are wordsmiths, not least journalists, is letting facts stand in the way of a good story. I am reminded of the actor Tom Hank’s discussion with Chesley Sullenberger, the pilot who landed his stricken aircraft on the Hudson River in 2009.

Sullenberger was worried that Hollywood would take liberties with the story. “No sir”, Hanks told him. “We’ll lie, we’ll condense, we’ll omit, and I’ll say things that you never said, and do things you never did. But barring that, we’ll be as authentic as we can”.

Words are slippery things and need to be used wisely and carefully. As T S Eliot reminds us (in Burnt Norton: V):

Words strain, Crack and sometimes break, under the burden, Under the tension, slip, slide, perish, Decay with imprecision, will not stay in place, Will not stay still.

But when words are handled well they convey the truth, the truth that will set us free. Let’s never forget the costliness of such truth telling. It will often provoke a response from the powerful and from vested interests.

You belong to one of the most dangerous professions in the world, with an average of about eighty journalists being murdered annually in recent years. It’s right and proper that in today’s Harvest Service we pray for the families and friends of journalists who have been killed for telling the truth.

So in this Harvest Service, let us offer the fruits of our labours to God, our words and images, giving thanks for all that has been and praying for our future."