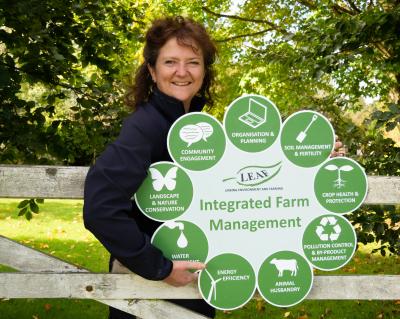 As a passionate chief executive of LEAF (Linking Environment And Farming), many members met and worked with Caroline during her 30 years with the organisation that “works with farmers, the food industry, scientists and consumers to inspire and enable sustainable farming that is prosperous, enriches the environment and engages local communities.”

Fellow Guild member and former LEAF board member David Richardson, said: “The spontaneous outpouring of grief at Caroline Drummond’s tragic death is a fitting tribute to a remarkable lady. She knew and was known by everyone who was anyone in farming and food, and as their comments show they all loved and respected her. What a lady!”

Caroline did not come from a farming background – her father was a deep-sea diver in the Royal Navy – but the Foot & Mouth disease outbreak in 1967 when she was a child made a lasting impression. When 14, she started working in Hampshire’s market gardens during holidays, and in the 1980s began studying agriculture at Seale-Hayne college.

During her gap year, she worked on farms in Norfolk and Lincolnshire during which she earned a licence to drive fork lifts, an illustration of what a practical, rounded person she was.

Later, Caroline married dairy farmer Phil Ward and commuted between their farm in Cornwall and LEAF’s office at the National Agricultural Centre, Stoneleigh in Warwickshire.

In an article, Caroline described how she came to be involved with LEAF: “I was working as a lecturer when a friend told me about the job and it sounded perfect. There were just two of us at LEAF, a table, some pencils and a bag of enthusiasm. I was very young to start an organisation but I learnt a lot very quickly.”

Launched at the Royal Show in 1991, LEAF’s initial focus was on arable production and its first initiative was to recruit demonstration farms practicing sustainable agriculture through integrated farm management.

LEAF had more than 1,000 members by 1997 and by the following year, the demonstration farms had welcomed more than 8,000 visitors, after which the organisation started promoting integrated farm management in the livestock sector.

A major achievement in 2002 was the launch with food retailers of LEAF Marque with its product labelling designed to promote sustainable farming practices to consumers, and that was followed in 2006 by the pilot Open Farm Sunday, an initiative that has been a huge success in giving farmers the tools and confidence to open their farm gates to visitors who learn the fundamentals of farming and food production.

Caroline’s inspirational leadership and achievements were recognised in 2009 when she was made an MBE.

Guild member Cedric Porter, said: “I can’t think of anyone else who has done so much for UK and World agriculture,” while Philip Gibson added: “She was an inspirational woman and a true advocate for British agriculture, as well as being a lovely person.”

Philip Case described Caroline as “a remarkable woman who was always so full of energy and a great ambassador for British agriculture. She will be hugely missed by everyone who was lucky enough to know her.”

Jamie Day commented: “It took extraordinary determination to build LEAF from a concept in more sceptical times to the force it is today,” while Keith Dawson said: “Such a passionate, enthusiastic, welcoming and inspired industry leader. She leaves a great legacy and many friends in the industry.”

The last words belong to Caroline herself: “I have been running LEAF since the beginning, 30 years ago. I am passionate about working with the Board, our team, members and farmers in delivering positive change on farm. The environment and farming go hand in hand and LEAF’s focus remains true to its core values and ambitions in transforming farming and food systems. As LEAF grows I still love how our work provides the catalyst for discussion, adaption, experimentation and change.”

The Guild sends heartfelt condolences to Caroline’s husband Phil, daughter Gabby, other members of her family and all at LEAF.